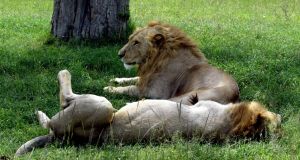 The report is based on analysis of 27,600 mammals, reptiles and amphibians, and cites double-digit decreases in the populations of species such as African lion (above), which has seen a 43 per cent drop since 1993. File photograph: Reuters

Humans and wildlife species face a future of rapid decline — including the heightened possibility of mass extinction — if measures are not taken within the next 20 years to arrest “powerful assaults on biodiversity”, scientists have warned.

Human overpopulation and over-consumption by the wealthiest in society are driving factors behind the destruction of species on planet Earth, which is having a negative impact on ecosystems, according to researchers in the US and Mexico.

Their warning, published in the Proceedings of the National Academy of Sciences (PNAS) journal in the US, states the hidden rate of species population decreases mean the “Earth’s sixth mass extinction episode has proceeded further than most assume”.

The report, compiled by scientists at Stanford and Mexico City universities, found the current rate of vertebrate extinction during the past century was two species a year — this was compared with two species every 100 years over the last two million years.

The estimates were likely to be “conservative”, they warn, with several species of mammal now endangered despite being at “relatively safe” levels at the turn of the millennium. “As much as 50 per cent of the number of animal individuals that once shared Earth with us are already gone, as are billions of populations,” it notes.

“We emphasise that the sixth mass extinction is already here and the window for effective action is very short, probably two or three decades at most. All signs point to ever more powerful assaults on biodiversity in the next two decades, painting a dismal picture of the future of life, including human life.”

The scientists say the loss of animals from the planet would “promote cascading catastrophic effects on ecosystems”, including plants and other wildlife.

Their report adds: “The resulting biological annihilation obviously will also have serious ecological, economic, and social consequences. Humanity will eventually pay a very high price for the decimation of the only assemblage of life that we know of in the universe.”

Wildlife is dying out due to habitat destruction, overhunting, toxic pollution, invasion by alien species and climate change. But the ultimate cause of all of these factors is “human overpopulation and continued population growth, and overconsumption, especially by the rich”, say the scientists, who include Prof Paul Ehrlich at Stanford, whose 1968 book The Population Bomb is a seminal, if controversial, work.

Prof Stuart Pimm of Duke University in the US, was not involved in the new work, but said the overall conclusion is correct. However, he disagrees that a sixth mass extinction is already under way: “It is something that hasn’t happened yet – we are on the edge of it.”

The PNAS study eschews the normally sober tone of scientific papers and classifies the massive loss of wildlife as a “frightening assault on the foundations of human civilisation”. Prof Gerardo Ceballos at the Universidad Nacional Autónoma de México, who led the work, told the Guardian: “The situation has become so bad it would not be ethical not to use strong language.”

Oonagh Duggan, assistant head of policy and advocacy at BirdWatch Ireland said her organisation shares the concerns of the report’s authors “on the lack of political impetus and willingness to accept that biodiversity globally and nationally is under severe threat”.

She added: “Birds are indicators of the health of our environment. The Corn Bunting, a bird of tillage farms, went extinct in Ireland during the 90s. Our population of corncrake was once widespread and is now reduced to small pockets of the west and north west. Other birds of our farmlands, like the Curlew and Hen Harrier, are under severe threat due to loss of habitat.”

The PNAS report is based on analysis of 27,600 mammals, reptiles and amphibians, and cites double-digit decreases in the populations of species such as African lion, which has seen a 43 per cent drop since 1993.

The researchers do not state how long it predicts the human race will survive, but add there is scope to address the decay of biodiversity. “The strong focus among scientists on species extinctions, however, conveys a common impression that Earth’s biota (animal and plant life) is not dramatically threatened, or is just slowly entering an episode of major biodiversity loss that need not generate deep concern now,” their report states.

“Thus, there might be sufficient time to address the decay of biodiversity later, or to develop technologies for ‘de-extinction’,” it adds.