Quadrivium: the noble fourfold way to an understanding of the universe 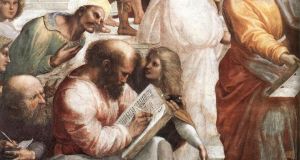 Pythagoras: the mathematician in The School of Athens, by Raphael, from 1509. Photograph: Creative Commons/Wikimedia

According to Plato, a core of mathematical knowledge, later known as the quadrivium, was essential for an understanding of the universe. He outlined the curriculum in his Republic. Quadrivium means four ways, but this term was not used until the time of the Roman philosopher Boethius, in the sixth century. It is said that an inscription over the entrance to Plato’s Academy, in Athens, read “Let None But Geometers Enter Here”. This indicated that the quadrivium was a prerequisite for the study of philosophy in ancient Greece.

The quadrivium originated with Pythagoras around 500 BC. The Pythagoreans sought the unchanging fundamentals underlying nature and society. Their quest was to find the eternal laws of the universe; the quadrivium became the name of the scheme they organised their studies into.

It arises from number, the subject revered by the Pythagoreans, and comprises four disciplines. The first is arithmetic, concerned with the infinite linear array of numbers. Moving beyond the line to higher-dimensional spaces, we have geometry. The third discipline is music or harmony, which is, fundamentally, an application of the pure science of numbers evolving in time. Fourth comes astronomy, the application of geometry to the world of space.

Arithmetic studies numbers, music the relationship between numbers and time, geometry magnitudes, and astronomy those magnitudes’ distribution in space

Pythagoras distinguished between quantity and magnitude. Objects that can be counted yield quantities or numbers. Substances that are measured provide magnitudes. So cattle are counted whereas milk is measured. Arithmetic studies quantities or numbers; music involves the relationship between numbers and their evolution in time; geometry deals with magnitudes; astronomy deals with those magnitudes’ distribution in space.

A key person in this organisation was Archytas, who flourished in Tarentum, in southern Italy, around 400 BC. He was one of the last scholars of the Pythagorean school and was the founder of mathematical mechanics, as well as a good friend of Plato. The designation of the four disciplines of the quadrivium is ascribed to Archytas. His views were to dominate pedagogical thought for more than two millenniums, and it is in some measure because of Archytas that mathematics has played such a prominent role in education ever since.

The Western Roman Empire was in many ways static for centuries. Nothing new was contributed to mathematics between the conquest of Greece and the fall of the Roman Empire, in AD 476. Boethius translated Greek texts about the quadrivium, including Euclid on geometry and Ptolemy on astronomy, and wrote texts on arithmetic and music. Although his books were poor copies of earlier work, and contained nothing original, they were considered authoritative, and were studied by medieval Irish monks.

The organisation of the quadrivium was formalised by Boethius, and this structure endured for more than a millennium. It was the mainstay of the medieval monastic system of education, which had a structure of seven subjects – the seven liberal arts – comprising the quadrivium and the trivium. The trivium was centred on three arts of language: grammar, for ensuring proper structure of language; logic, for arriving at the truth; and rhetoric, for the beautiful use of language. Thus the aim of the trivium was goodness, truth and beauty. In the modern era the mathematics writer Morris Kline classified the four subjects of the quadrivium as pure (arithmetic), applied (music), stationary (geometry) and moving (astronomy).

Peter Lynch is emeritus professor in the school of mathematics and statistics at University College Dublin. He blogs at thatsmaths.com