The record-breaking power of storm waves at Aran 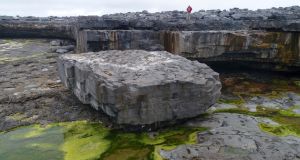 You look at the rock-moving power of storm waves, can you explain?
“Storm waves move gigantic boulders on the Aran Islands – truly huge, up to hundreds of tonnes, and in some cases they are high up or a long way inland. Previously, people had argued that only tsunami could move such large boulders, but we showed that Irish storm waves were well up to the task.

How did you start the research on the Aran Islands?
I studied geology at University College Dublin, then I went to America to do a PhD. I planned to come home afterward, but at Stanford I met a lovely man who was also a geologist – Mark Brandriss – and we married.

We live and work in Massachusetts now. But one Christmas when I was home, The Irish Times had an article about interesting research on boulder deposits on the Aran Islands. I used it in a course and one of my students, Danielle Zentner, talked me into starting a project.

When I walked across Inis Mór for the first time, in 2008, and saw the incredible boulders and the extraordinary landscape, I was hooked. Since then, I have been bringing groups of students over every summer for field work.

How do you track the boulders?
Year after year we take photographs and drone images (with my brother Peter Cox, a landscape photographer), and we compare images from one year to the next, We can track individual boulders, and we know their exact positions – how high up and how far inland. We can also calculate their weights.

So you listen out for storm forecasts?
Yes! I get the Met Éireann warnings, and I track the wave forecasts. Like recently, 14-metre seas off the Aran Islands with Storm Jorge! That means that we will see a lot of interesting erosion and movement next summer.

I feel guilty for getting so excited when I know that this storm could mean terrible things for the people on the islands. But I’m already planning all the great work we can do to measure the storm damage.”

What has been your most stand-out finding?
The big breakthrough came after the very stormy winter 2013-2014. After years of seeing very little change, the work done by those storms was extraordinary. We traced movement of about 1,100 boulders, from the size of a bread box to a house. One boulder that shifted was 620 tonnes.

The previous documented ‘record’ for a storm wave had been a 180-tonne boulder, so our finding was big news and it changed the perception of what coastal storm waves are capable of.

Have you a favourite moment from the field work?
In the 1930s’ Robert Flaherty film Man of Aran, there is one shot that shows a boulder deposit near Bun Gabhla. I went and found the exact spot where Flaherty had stood, and re-took the shot.

That was a goosebumps moment, standing in the footprints of the cameraman. Then comparing the pictures showed big changes, which was excellent! I have also met some wonderful people, including Ronan Mac Giollapharaic, who’s a great naturalist on Inis Mór and takes photos of boulders for me after storms.

And how do you take a break from the research?
The field work itself is a lovely escape from the office, and its own reward. And I love walking my dog in the woods here. It is a great way to clear the head, and I come back energised and more productive.”