The cavemen within: Did love, not war, bring an end to Neanderthals? 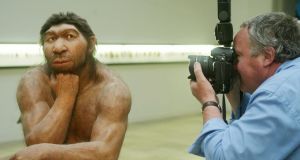 A reconstruction of a Neanderthal displayed at the Prehistoric Museum in Halle, eastern Germany. Photograph: Sebastian Willnow/AFP/Getty Images 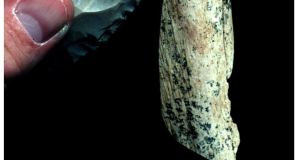 A fragment of Neanderthal thigh bone shows cutmarks left by the sharp edge of a flint stone tool, similar to the one held here. Photograph: David DeGusta-Berkeley/Reuters

There’s always been a suspicion that our ancestors pushed Neanderthals to extinction. The scenario is that modern humans migrated out of Africa and slaughtered or stole hunting grounds from Neanderthals, wiping out our closest relatives about 40,000 years ago.

Another explanation is offered by Prof Svante Pääbo, a Swedish scientist who sequenced the first Neanderthal genome, using DNA extracted from bones found in a Croatian cave. He believes Neanderthals mixed with modern humans until they dissolved into us.

What likely followed was infrequent mixing of modern humans and Neanderthals to give rise to hybrid children, Pääbo says. This would explain a remarkable finding from his lab at the Max Planck Institute for Evolutionary Anthropology in Leipzig, Germany; about 2 per cent of our DNA came directly from Neanderthals.

“The reason Neanderthals disappeared might simply be because they were absorbed into larger modern human populations,” Pääbo adds. “Everyone outside of Africa carries traces of Neanderthal DNA.” This includes people in parts of the world where we know Neanderthals never set foot. It seems that modern humans came out of Africa and met Neanderthals. Where they met, they mated.

This view of love, not slaughter, has gained support. “There was a relatively long period of overlap between Neanderthals and humans in both the Middle East and Europe,” says Prof Rasmus Nielsen, a computational geneticist at the University of California, Berkeley, who flags 40,000 to 65,000 years ago as a key time period. “There seemed to be a steady increase in the amounts of humans and a steady decline in Neanderthals.” He estimates there may have been 10 times as many humans as Neanderthals.

“The genetics suggests that humans and Neanderthals mixed proportionally to their population sizes and essentially merged to become one new species,” says Nielsen.

However, because the Neanderthals had a smaller population and more inbreeding, natural selection has chiselled away at their DNA contribution since this merger, Nielsen adds, reducing it from 10 per cent at the start to 2 per cent now.

“Many of us carry fragments of Neanderthal DNA in our chromosomes,” notes Pääbo. One flavour of a gene puts some of us at risk of Type II diabetes. One in four Asian people carry it. This came to us from Neanderthals, Pääbo explains. “Today it gives us diabetes, but it was probably advantageous when we had periods of starvation.”

Pääbo says human genetic studies also turn up gene variants that seem to protect us against diseases and that seem to have come from our Neanderthal ancestors. In fact, Neanderthal DNA might have even helped us survive flu pandemics, one study suggests.

A discovery of hybrid children of Neanderthals and another form of human (see panel), among just a handful of ancient bones, suggests mixing of humans was common enough.

More evidence of interbreeding comes from a modern human who lived about 40,000 years ago in what is now Romania, whose DNA shows he had a Neanderthal in his family tree. Pääbo – who wrote about his research in Neanderthal Man: In Search of Lost Genomes (2014) – says perhaps half of Neanderthal DNA still exists today, spread out among ourselves.

These other humans, Denisovans, also contributed some genes to modern humans. There is one flavour of a gene (EPAS1) found at unusually high frequencies in Tibetan people who live at very high altitude, where there is less oxygen in the air. “This had already been known about,” says Pääbo, “but it turns out that this came from the Denisovans,” who appeared to be well adapted to colder climes. This EPAS1 gene variant improves the transport of oxygen in blood.

Our ancestors mixed readily with other humans and we still carry their DNA. “Hominin species may not evolve as an evolutionary tree with branches that split up from each other and then occasionally go extinct,” says Nielsen. “Rather species diverge and then merge again.”

The diversity of our human past is key to our success as a species, he points out – Neanderthals are not entirely gone.

Discovery of a new human

Our picture of human evolution was upturned by a tiny bone fragment unearthed in a Siberian cave. “We were surprised to find that this was neither a Neanderthal nor a modern human, but something else entirely,” recalls Prof Svante Pääbo at the Max Planck Institute for Evolutionary Anthropology in Leipzig.

This led to the discovery of a new people, named Denisovans, after the Denisova Cave in Siberia, named after a local hermit called Dyonisiy (Denis).

They shared more than just living quarters. In the journal Nature, Pääbo’s group reported that DNA extracted from a bone there came from a person who lived 90,000 years ago and who had a Neanderthal mother and a Denisovan father.

The Denisovan father had some Neanderthal ancestry too, from Western Europe. Surprisingly, the little-known Denisovans seemed to occupy much of Asia and these other humans added as much as 5 per cent to the DNA of today’s Pacific island and Australian natives.

So far, we have fossils from a just handful of Denisovans, while we have hundreds of Neanderthal skeletons. More Denisovan bones are turning up. Last summer, scientists recovered the first Denisovan remains, a jawbone, from a place other than the famed Siberian cave.

The jawbone came from a Karst cave high on the Tibetan Plateau in China, 3,280m above sea level. It gave support to geneticists who had predicted that the newly discovered hominins were once widespread in the region.