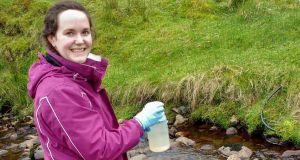 What is your area of research?

“I am developing a sensor system that can tell us what species are present in an environment. It uses the fact that organisms shed DNA into their surroundings, and we want to detect this environmental DNA, or eDNA, to see what species are around. I have been building a sensor system to look at the species of Atlantic salmon present in the Burrishoole catchment in Co Mayo, just by analysing eDNA in water samples.

Has it all been plain sailing?

No, although luckily we managed to solve some problems early on, and that helped us to shape a better sensor system. Initially, we were going to use a standard lab method called PCR to amplify specific segments of eDNA for analysis – but PCR involves heating and cooling samples, so it wasn’t great for deploying in the field.

In the lab where I work in DCU, other researchers were using a genome editing system called CRISPR-Cas, which doesn’t need heating, so we developed the detection system based on CRISPR-Cas instead.

At first, when I got the results from the salmon eDNA, it seemed to work perfectly. I was so excited showing my supervisors those results. Then I ran the system on brown trout DNA, in the hope that it would come up negative. But it worked beautifully on the trout as well as the salmon. This was disappointing, because it meant the system wasn’t specific. All my excitement came plummeting down again, I was gutted.

What did you do when you got that result?

One of my supervisors, Prof Anne Parle-McDermott, kept me thinking positively. She pointed out that we had developed a sensor that could detect eDNA, and now it just needed some tweaking to make it more specific. So that’s what we did, and we published the findings last year in the journal Molecular Ecology Resources.

How was that work received?

Really well, we have had lots of interest in it. Although CRISPR-Cas is well known in the field of genome editing, it is far less used in ecology, so the study stood out a bit. I was also grateful to win some awards, including the first prize for a student talk at a Fisheries Society of the British Isles symposium and the Environmental Sciences Association of Ireland postgraduate of the year award.

What would you like to see change in science?

One of the things that made it harder for me to design our system was that I was reading other studies to figure it out, but those studies tended to be about the times that experiments worked.

I would really like to see more negative results and unusual findings being published, I think it would give other researchers a more realistic basis for their work too. Social media can help, as researchers can share more day-to-day information about what is working and what is not.

And how do you take a break from the research?

I love netball. I played a lot when I was growing up in Kent in England, and now I play for a club in Dublin. As an undergrad at the University of Warwick, I did a lot of Latin/Ballroom dancing too, and now I teach classes with the DCU Dance Society. ”