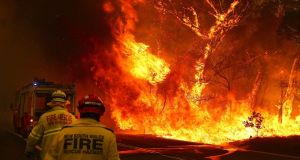 Fire and Rescue personal run to move their truck as a bushfire burns next to a major road and homes on the outskirts of the town of Bilpin on December 19th, 2019 in Sydney, Australia. Photograph: David Gray/Getty Images

The recent bushfires in Australia were exacerbated not only by global warming but also by other factors. There is no doubt climate change must be tackled as an urgent priority but it is equally clear that, despite our best efforts, progress will be slow and gradual. However, other factors that exacerbate these bushfires can be effectively tackled immediately. In particular, I believe, more action should be taken to reduce the fuel load in the bush and forests.

Millions of hectares of bush were burned in the recent fires and 28 lives were lost. Annual bushfires in Australia are an unavoidable natural phenomenon. The explorer Captain James Cook (1728 - 1779) sailing along the east Australian coast in 1770 remarked: “Smoke by day and fires in the night.” Particularly bad bushfires in terms of lives lost, homes destroyed and areas of land burned occurred in 1851, 1926, 1939, 1967, 1983 and 2009. The worst fire to date was in 2009 in Victoria where 173 people died and over 2,000 homes were lost.

Global warming is exacerbating the bushfire situation, but so are several other factors that are also completely amenable to reform in the immediate term. These factors include: (A) failure to regularly reduce “fuel load” in bush and forests; (B) the growing lack of skilled firefighters (most firefighting is voluntary but the firefighters are ageing and fewer volunteers are coming forward); (C) zoning laws allowing greater penetration of housing into the bush; and (D) arson.

Many experts such as Vic Jurskis, a fellow of the Institute of Foresters of Australia identify fuel load as the biggest factor exacerbating the bushfire problem. Fuel load refers to accumulation in the bush of undergrowth, fallen trees and grass killed by previous fires, fallen branches and leaves, etc. This accumulation provides much extra fuel for the next fires. Doubling the available fuel doubles the rate of fire spread and quadruples the intensity.

In the 1950s and 60s the Australian Government regularly reduced this fuel load by controlled use of hazard-reduction fires in winter. This precautionary burning is smokey and uncomfortable for nearby suburban areas and also imposes a burden on wildlife.

And so, under pressure from the Greens, such precautionary prescribed burning has significantly reduced in recent decades. Fuel loads now increase greatly in unburned areas and then erupt into intense summer fires. The 2009 Victorian Bushfires Royal Commission Report identified the failure to reduce fuel load as a factor that intensified the huge 2009 fires.But all that said, it must be acknowledged also that climate change accelerates the danger of bush fires. Australia experienced both its hottest-ever and driest-ever year in 2019 – the next hottest years were 2013, 2000 and 2018 and 2017 in that order.

This condition draws moisture and rainfall away from Australia. And a 2018 Nature Communications paper reported that global warming increases the frequency of extreme IOD events. Global warming also affects another meteorological phenomenon called the Southern Annular Mode in a manner that tends to dry Australia during the winter.

There is a distinct preponderance of media opinion that the Australian bushfires confirm our worst fears about the consequences of climate change. Greta Thunberg tweeted: “We still fail to make the connection between the climate crisis and increased extreme weather events and natural disasters like the Australian fires. That’s what has to change. Now.”

That’s fine, but even if the entire world immediately went “hell for leather” at reducing greenhouse gas emissions, which is unlikely to happen, slowing down and reversing global warming would still be a slow process akin to stopping a fast moving ocean super-tanker.

We must of course acknowledge the role played by climate change and make every effort to reduce greenhouse gas emissions, but, in the meantime, measures known to directly reduce the extent and severity of the annual Australian bush fires, such as reducing fuel loads, should be implemented now. Pointing exclusively to global warming only serves to remove the incentive to take these other simple and immediately effective measures.

Plan for Oscar Traynor housing development in Santry approved by councillors 21:27
Legal costs in dispute over €228,000 ‘may exceed €500,000’ 21:20
Midlands must not become ‘rust belt’ after power plant closures 21:06
Online abuse an ‘increasing barrier’ to women in politics 20:54
Garda send file on RTÉ retirement party to DPP 20:50