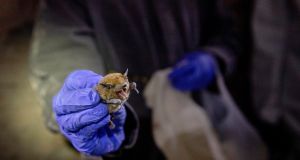 The world has to face up to the reality that the current coronavirus epidemic is not a once-off.

What’s more, scientists who study these viruses have repeatedly warned for some time coronaviruses originating in bats in China were poised to cause another Sars-like outbreak in people.

Legions of strains are living inside wild bats, and some are already capable of infecting human lung cells. Almost unnoticed to the rest of the world, this has been happening regularly in China, with heightened risk of an epidemic breaking there among the human population.

“The whole of southern China is peppered with caves, and bats live in all of them,” says virologist Dr Peter Daszak, president of EcoHealth Alliance based in New York who has searched China for new coronavirus strains. “There’s an abundance of bats and people get exposed to them.”

He has led virus hunts that turned up more than 500 new coronaviruses in bats in China in the past 10 years. And when they tested 400 people in southwest China, six had antibodies against bat coronaviruses, suggesting that they regularly spill over to people. When scientists exposed human lung cells in a lab to some coronaviruses from wild bats, the cells got infected.

The viruses live close to people. For five years Chinese scientists visited the one limestone cave outside Kumming city in Yunnan province, close to the Burmese and Vietnamese border. They brought back 600 swabs, and identified 64 bat coronaviruses that were remarkably similar to the Sars virus that infected 8,000 people in 2002-2003, reporting their findings in November 2017.

The novel coronavirus virus first isolated in Wuhan has an 80 per cent RNA sequence match with the Sars virus, and a 96 per cent match with some viruses from wild bats. The higher the percentage, the more closely related they are. “The one that spilled over to people did not need to change in any way to infect people,” Dr Daszak adds. People do not necessarily have to eat the bats (though bats are eaten). The viruses are in the intestinal tracts of bats and are present in the faeces.

Coronaviruses are troublemakers because they jump species easily. Sars went from bats to civet cats to people. Coronaviruses are also poor proof-readers of their RNA after they replicate, which generates lots of mutations. They swap genes between themselves and have large genomes, which allow for redundancies – that is, have multiple genes that perform the same function.

Dr Cillian De Gascun, head of the National Virus Reference Lab in UCD, notes that RNA viruses are able to recombine their genomes. “RNA viruses make more mistakes during replication and that facilitates evolution,” she notes, making it easier for them to adapt to their new host once they cross into a new species.

“Coronaviruses recombine bits of gene from one another and evolve very quickly,” adds UCD bat biologist Dr Emma Teeling, who studied a coronavirus outbreak in cheetahs earlier in her career.

Bats are ideal hosts. They roost in colonies, jammed wing to wing, where viruses spread with ease. They fly, moving their viruses from one location to another. But there is also something special about bat biology. Bats allow lots of viruses live inside them without succumbing to illness.

“Bats have a unique tolerance,” adds Dr Teeling. This is a spin-off to them being flying mammals, she contends. Flight requires extreme metabolism and burns up oxygen incredibly fast. This damages DNA and could provoke an immune response. “Bats evolved mechanisms to dampen down their response to this damage; to suppress inflammation,” she says.

When people suffer severe illness from Sars or Ebola, it is usually because of their own immune response, which revs into overdrive in an effort to defeat the virus. Ebola also originated in bats. As apparently did Mers. Perhaps we need to learn from the bats. “We need to look at the bats and see how they live with these viruses,” says Dr Teeling. This could help us develop new anti-viral drugs.

In 2018 Dr Daszak and his colleagues pinpointed the culprit of an outbreak in China that killed 25,000 piglets across four farms. This was a new coronavirus that originated in bats, causing an outbreak strikingly similar to Sars, the scientists warned in the journal Nature.

The point is that there is an abundance of coronaviruses in bats that are, or close to, being able to infect other animals and people. “The warning is simple,” Dr Daszak warns. “Get ready for more of these pandemics.”

He’s not alone in that view, as a separate group of scientists in the US warned in 2018 about a Sars-like virus they identified in Chinese bats – reported in the journal Proceedings of the National Academy of Sciences.

The measures to ward off pandemics will partly be about tracking and reducing wildlife trade and consumption. “We know bats have a huge number of coronaviruses,” says Dr De Gascun. “Deforestation and live wildlife food markets means our exposure to these animals has been increasing.”

We should be more proactive in identifying likely strains that will jump to humans, and start developing drugs against them now, instead of during a crisis, he stresses.

The name “coronavirus” stems from crown-like protrusions, which are crucial spike-shaped proteins on their surface. The novel Wuhan virus uses these spikes to latch on to a hook, called the ACE2 receptor, which is abundant on cells in the lower reaches of our lungs. This is why people suffer bronchitis or pneumonia, signs of deep lung infection. A few minor changes to this spike protein can allow a coronavirus to infect a new species.

Before the Sars outbreak, coronaviruses were a scientific backwater. The group was of some interest to veterinary scientists, known to easily switch between farm animals and cause diarrhoeal diseases.

The big change that is driving new coronavirus outbreaks, says Dr Daszak, is burgeoning human populations encroaching and disturbing bat habitat. Live wildlife markets that bring wild animals close together increase the chances of viruses jumping from one species to the other.

Unfortunately, we are especially susceptible to new zoonotic viruses. “Nobody has seen this virus before. So everyone is susceptible. We have to wait and see what happens,” Dr De Gascun says. Future outbreaks are inevitable, he expects. “It is not surprising that it has happened again. You could argue that what is surprising is that it doesn’t happen more readily.”