The cosmic conundrum that is dividing opinion 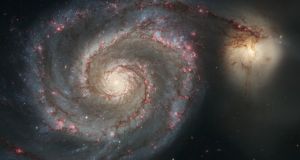 It has taken three satellite experiments over two decades to accurately measure the cosmic microwave background, thousands of scientists have painstakingly built their careers on this endeavour and books have been written

We have one universe, but at present different determinations of its rate of expansion, which simply do not agree. This constitutes a puzzle, the resolution of which may reshape cosmology – the study of the universe.

Sit on a street corner in any busy city and you will encounter the Doppler effect, the familiar change in pitch, or frequency, of an ambulance siren as it approaches and recedes.

Now, replace sound with light and look out into deep space, but well beyond the naked eye. Vesto Slipher did this a century ago, observing that the light from distant galaxies also experienced a shift towards lower frequencies.

In essence, there is a mysterious force, called dark energy, pushing the universe apart

Later Edwin Hubble combined redshift with distance measurements to provide evidence for a direct relation between how far a galaxy is away and how quickly it is receding, thereby defining the Hubble constant H0, the source of the current disagreement.

Surprisingly, this observation suggests that the Doppler shift is not down to relative galaxy motion, but in fact due to the space between galaxies, in other words the universe itself, expanding. Running this process backwards in time one finds support for a Big Bang epoch, when the universe was extremely small and unimaginably dense.

One twist, unforeseen by Hubble, is that the expansion is actually accelerating. In short, astronomers use stars, called “standard candles”, which emit light in a characteristic way, either by explosion (Type Ia supernovae) or pulsation (Cepheids), to infer distances.

Saul Perlmutter, Brian Schmidt and Adam Riess shared the 2011 Nobel Prize for showing that observations of supernovae were better explained by a universe with accelerated expansion.

In essence, there is a mysterious force, called dark energy, pushing the universe apart. The simplest explanation of this feature is the addition of a “cosmological constant”, denoted A, a concept originally introduced by Einstein to his field equations describing gravity.

Deep space is by no means empty, rather it is a balmy 2.7 degrees warmer than a true vacuum. This temperature is due to light, called the cosmic microwave background (CMB), which was emitted when the universe was in its infancy and only 380,000 years old.

But the temperature has small fluctuations, which can be measured by satellite experiments, such as the European Space Agency’s Planck satellite, which Ireland has helped build.

It turns out that the information encoded in the CMB is extremely well described by a model built on the assumptions of a cosmological constant and cold dark matter (CDM), and from the Lambda-CDM cosmological model and CMB data, Planck has accurately inferred the Hubble constant to be 67.4 kilometres per second per megaparsec with 1 per cent accuracy.

In other words, space should be receding 67.4 kilometres per second faster for each megaparsec (Andromeda, our nearest neighbour galaxy, is 0.78 megaparsecs away) of distance.

Over a decade ago Riess, a professor at Johns Hopkins University, formed the SH0ES (Supernovae H0 for the Equation of State) collaboration with the specific goal to determine H0 to within 1 per cent error.

This builds on earlier work by Wendy Freedman from Chicago who led a collaboration arriving at H0 = 72 with 10 per cent error in 2001.

The basic idea is to follow in the footsteps of Slipher and Hubble, but combine Type Ia supernovae with Cepheids to provide a complementary local measurement of the Hubble constant based on standard candles.

This process has consistently returned higher values and as of March 2019 the best estimate is H0 = 74 with under 2 per cent error, thus placing it in strong conflict with Planck. Understandably for Nobel Laureate Riess, this difference in the Hubble constant “may be the most exciting development in cosmology in decades”.

The surprise of the SH0ES result cannot be overstated. The precise agreement between the ACDM model and the CMB data is widely regarded as the crowning achievement of our study of the cosmos.

It has taken three satellite experiments over two decades to accurately measure the CMB, thousands of scientists have painstakingly built their careers on this endeavour and books have been written. The result of Riess and collaborators quietly suggests that something is missing from the Lambda-CDM cosmological model, potentially leaving physicists with the exciting task of identifying the missing ingredient. A few years ago, this was unthinkable.

Naturally, the community is divided and local experts in Ireland are no exception. The overall tone is one of cautious optimism. On one hand, Dr Cormac O’Raifeartaigh (Waterford IT) agrees the conflict “may be be a strong hint that something is wrong in our theories of the cosmos”.

On the other, Prof Peter Coles (Maynooth University), recognises the discrepancy is “interesting”, but recalling previous protracted and bitter disputes over H0, reminds us that “the history of this field is one of drastically underestimated systematic errors”.

Nevertheless, the tide appears to be turning in Riess’s favour: in the last few weeks alone, the H0LiCOW collaboration announced a measurement of 73.3 kilometres per second per megaparsec. Subsequently, different groups have posted measurements of 69.8, 73.6 and 76.5. The jury is clearly still out, but Riess may have a second Nobel Prize in his sights.

Regardless of the outcome, we appear to be witnessing the scientific process at its best. In science, time and time again it is often seemingly innocuous-looking disagreements that mask the next big breakthrough.

Eoin Ó Colgáin is a theoretical physicist at Asia Pacific Centre for Theoretical Physics in Pohang, South Korea and is “captivated by the Hubble constant” – ocolgain.eoin@apctp.org