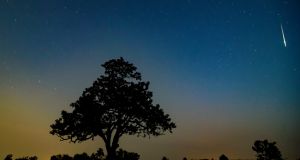 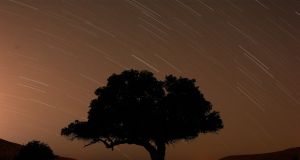 A long exposure shows stars behind a tree during the annual Perseid meteor shower near the town of Mitzpe Ramon, in southern Israel. Photograph: Reuters/Amir Cohen 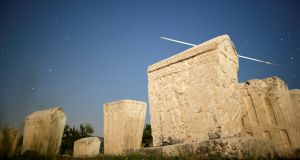 A meteor streaks past stars in the night sky above medieval tombstones during the Perseid meteor shower in Radimlja near Stolac, Bosnia and Herzegovina. Photograph: Reuters/Dado Ruvic 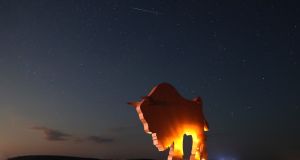 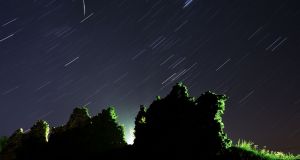 A long exposure picture shows a Perseid meteor crossing the night sky and stars trails above the ruins of a medieval castle in the village of Kreva, some 100 km northwest of Minsk. Photograph: Sergei Gapon /AFP 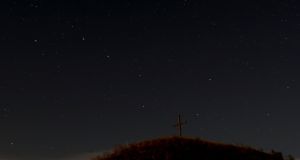 The star constellation Ursa Mayor (Great Bear) is seen in the sky over Leeberg hill during the Perseid meteor shower near Grossmugl, Austria. Photograph: Reuters/Leonhard Foeger

The annual meteor shower reached its peak on Tuesday morning, and astronomers had anticipated 60-70 shooting stars per minute. However, poor visibility meant that many spectators struggled to see any.

“They were less than half as good as last year but we expected that with the moon.”

Jonathan Mackey, an astrophysicist at Dublin’s Dunsink Observatory, was magnanimous about missing out this year.

“I’ve seen it loads of times before. I remember being in Cape Cod in 2000 or 2001 when it was completely dark and that was fantastic. Dublin can’t really compete.”

Under dark, clear skies, stargazers can expect to see as many as 150-200 shooting stars an hour.

This year, the International Meteor Organisation registered highs of 90 stars per hour, with much lower results for Ireland.

The number of shooting stars are counted in a rudimentary method, by recording the number seen with the naked eye in 10 or 15  minutes, and scaling up for an hourly rate.

Frances McCarthy, the head of education and Outreach at Cork’s Blackrock Observatory, reassured those who failed to observe any meteors. “There’s a chance to see the Perseids tomorrow and in the coming weeks, because the Earth goes into the comet’s path for a few weeks.”

The Perseids are brightest after midnight, “when the Earth’s orbit is smashing into them”.

The pea-sized meteors were left behind by the comet Swift-Tuttle, which last passed Earth 133 years ago, Ms McCarthy commented.

They can travel at speeds of 58km per second, before burning up at temperatures of 3,000 to 10,000 degrees in the Earth’s atmosphere.

Although the peak for meteor activity comes to an end tonight, stargazers can expect to see shooting stars for another 10 days.

Ms McCarthy’s advice is to “keep looking: bring a deck chair and a sleeping bag for warmth, have a nap first and go out early in the morning”.

The Perseids meteor shower was visible in skies across Europe and the Middle East on Monday night.

Where meteor showers come from

If you spot a meteor shower, what you’re usually seeing is an icy comet’s leftovers that crash into Earth’s atmosphere. Comets are sort of like dirty snowballs: As they travel through the solar system, they leave behind a dusty trail of rocks and ice that lingers in space long after they leave. When Earth passes through these cascades of comet waste, the bits of debris ? which can be as small as grains of sand ? pierce the sky at such speeds that they burst, creating a celestial fireworks display. A general rule of thumb with meteor showers: You are never watching the Earth cross into remnants from a comet’s most recent orbit. Instead, the burning bits come from the previous passes. For example, during the Perseid meteor shower you are seeing meteors ejected from when its parent comet, Comet Swift-Tuttle, visited in 1862 or earlier, not from its most recent pass in 1992.