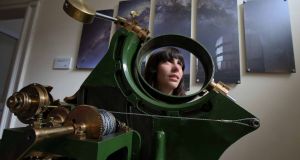 Ireland’s role in major astronomical discoveries of the past century is being recognised with a travelling exhibition that arrives in Dublin this week.

The centrepiece of the Dublin Institute for Advanced Studies (Dias) exhibition is the Grubb coelostat that was designed in 1919 by Rathmines man Howard Grubb, and used in testing Albert Einstein’s general theory of relativity.

Grubb was a respected telescope-maker and businessman, who employed 400 people in his optical works in Observatory Lane.

The coelostat, or solar telescope, played an essential role in proving Einstein’s theory of general relativity which was published in 1915.

Einstein predicted that starlight would be deflected during a solar eclipse, with the amount of deflection increasing from stars that came closer to the sun.

Grubb’s device reflected light from the sky onto a fixed telescope and the lens focused the light onto a photographic plate, enabling light deflection to be observed.

Ahead of an eclipse in May 1919, the Royal Irish Academy sponsored an expedition to Brazil, where several bright stars were due to appear close to the sun during the eclipse. The equipment was operated by another Irishman, Co Antrim’s Andrew Crommelin, whose results confirmed Einstein’s theory.

Grubb’s equipment is usually housed by the Dias Dunsink observatory in north Dublin, but has been on loan to a Brazilian museum. It is being displayed as part of a chronological tour of the most significant breakthroughs in astronomy and space exploration over the past century.

Prof Tom Ray, of the Dias School of Cosmic Physics, said: “[Visitors] will see incredible progress over the 100 years and they’ll see Ireland’s involvement in it.”

Visitors will also learn about Larne scientist Jocelyn Bell who co-discovered the first radio pulsars – or collapsed stars – in 1967. She was overlooked for a Nobel Prize in favour of her supervisor, because she was a research student at the time.

Prof Ray hopes the exhibition will show that astronomy goes beyond stargazing, stating that advances in astronomy have informed progress in other areas, including mobile phone technology.

“Einstein’s theory is used in GPS systems; digital cameras were first developed by astronomers in the late 1970s; and WiFi was first developed in astronomical facilities in Australia, for radio telescopes that needed minimal interference.”

The Above and Beyond exhibition is open to the public at the Wood Quay Venue, Wood Quay, Dublin 2 from Tuesday, August 20th to Thursday, August 29th.

Commemorating the centenary of the International Astronomical Union, it has already been staged across selected venues in Europe and is midway through an Irish tour that takes in locations including Armagh, Birr, Cork and Galway.