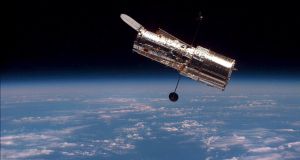 One of the great surprises of 20th century science was Edwin Hubble’s discovery that the distant galaxies are rushing away from us at a speed proportional to their distance.

This discovery, known as Hubble’s law, is one of the major planks of evidence for the famous “big bang” model of the universe. I was, therefore, somewhat disconcerted to learn that the International Astronomical Union (IAU) has recently voted to rename Hubble’s law as the Hubble-Lemaître law.

Granted, the discovery of the recession of the galaxies was by no means the work of one person alone, as so often in science. The first evidence of the phenomenon was observed by the young American astronomer Vesto Melvin Slipher.

Working with a relatively modest telescope at the Lowell Observatory in Arizona, Slipher found that the light from many of the spiral nebulae – cloudy celestial objects at great distance – was significantly redshifted.

(In physics, the wavelength of light emitted by an object is shifted to the red if the object moves away from the observer, an effect known as the Doppler effect).

By 1917, Slipher had established that many of the distant nebulae appeared to be moving away at speeds of up to 1,000km a second; intriguingly, the faintest nebulae showed the largest recession velocities.

However, the distances to the spiral nebulae were not known at this time. In the mid-1920s, Edwin Hubble used the world’s largest telescope at Mt Wilson in California to establish that the nebulae lay far beyond the Milky Way, constituting distinct galaxies of stars.

In 1929, he combined his measurements of the distances of the nebulae with Slipher’s redshifts to show a linear relation between the two – the further away a galaxy, the faster it was moving.

But what was causing the galaxies to run away? In fact, a radical explanation was already at hand. In the early 1920s, the young Russian mathematician Alexander Friedmann noticed that Einstein’s general theory of relativity made a strange prediction when applied to the universe as a whole; relativity predicted that the universe would expand or contract.

Sadly, Friedmann’s work was ignored, probably because it was very mathematical and made no connection with astronomy.

By contrast, the brilliant young Belgian theorist Georges Lemaître was closely acquainted with the work of both Slipher and Hubble. Unaware of Friedmann’s analysis, Lemaître also discovered that the general theory of relativity predicted a non-static universe.

In a seminal paper of 1927, Lemaître suggested the observations of the astronomers were really a manifestation of a grand expansion of space on cosmic scales. He even used preliminary data from Hubble and Slipher to obtain an early estimate of the rate of expansion (later known as the Hubble constant).

Lemaître’s thesis was also ignored at first, but this changed with Hubble’s publication of a linear redshift-distance relation for the nebulae in 1929. By the mid-1930s, many theorists had accepted that the redshifts of the nebulae represented an expansion of space on the largest scales.

However, the theory was not accepted by some astronomers for many years; indeed, Hubble himself never fully acknowledged it. Thus, it is somewhat ironic to read in the popular literature that “Hubble discovered the expanding universe.”

With all this in mind, one can see the case for renaming Hubble’s law as the Hubble-Lemaître law. However, I find the IAU proposal problematic for two reasons. The first problem is that it is rarely a good idea to rewrite history.

While it is hard to pin down when exactly the moniker “Hubble’s law” first appeared in the literature, it has certainly been used for many decades. For at least some of that time, the law was understood as a simple relation between redshift and distance for the spiral nebulae.

Indeed, it is quite common in science for an empirical relation between two quantities to be labelled a law in this way (Boyle’s law and Ohm’s law are two other well-known examples).

A second problem is that the proposed renaming conflates two distinct discoveries – Hubble’s observation of a redshift-distance relation for the nebulae and Lemaître’s derivation of a theoretical law of cosmic expansion from general relativity.

A philosopher would point out that the first of these phenomena is merely one manifestation of the second. Indeed, the distinction is of particular importance today as an intriguing conflict has broken out between measurements of the rate of cosmic expansion from redshift-distance studies of nebulae and supernovae, and measurements of the rate of expansion by other methods.