Conservation can kill our melancholia for dying species 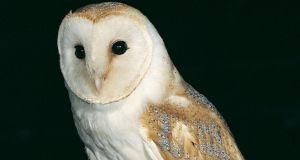 The barn owl: there may be more kitschified cartoon owls on pencil cases in Irish classrooms than breeding pairs in the wild. Photograph: Birdwatch Ireland

Of the 450-odd species of bird we have in Ireland, barn owls must be one of the most enigmatic: full-moon faces, pearly-white feathered breasts, and dark eyes that seem to look straight through you and into another dimension. Cameras do no justice to the beguiling grace, deft and ferocity that these extraordinary creatures possess, whether gliding low and silent over hummocky meadows, diving feet-first for small mammals, or hunkering in trees to devour their prey and hissing at each other like snakes.

Yes, hissing. Some people say it’s more like a screech, but I think hiss captures it best – an urgent, guttural hiss that cuts through the warm air of a summer’s night and sends a chill up your spine. This hiss, many suspect, is part of the reason why the barn owl is often associated with the banshee and venerated as the harbinger of death. Sitting on a riverbank in the dark and eavesdropping on these eerie conversations, it’s not hard to see why.

There is a deep irony in this. Barn owls, as a species, are on the verge of death themselves. Homeless for the lack of crumbling barns and ruined castles in the landscape, hungry for the lack of small mammals that are themselves hungry and homeless, and poisoned by their predation on what we consider pests – mice and rats – and so laced with toxic rodenticides that bioaccumulate in the owls and slowly kill them.

I’d wager that there are more kitschified cartoon owls on pencil cases in Irish classrooms than there are breeding pairs in the wild. Indeed, this is how most children know them.

The knickknacks and accessories at fast-fashion checkouts baring the Disneyfied faces of endangered species like these speak to our loss – both of nature itself and of our part in it – and the consequent grief. The cultural theorist David Lloyd referred to this phenomenon as “the congealed memory of traumas too intimate and too profound to be lived over without stylisation and attitude”. As the web of life that birthed them continues to unravel, such inauthentic reproductions of owls, bees, foxes and the like, filtered and affixed to phone covers and slogan T-shirts signal nothing but the most melancholic virtues.

On some level I think many of us are starting to notice this sense of melancholy, our helplessness juxtaposed against the high-profile activism of Greta Thunberg, or the relentless headlines declaring epoch-defining increases in land surface temperature and unprecedented declines in species richness and abundance, or the baffling inflexibility of political and economic systems that we feel unempowered to change.

Few of us, though, are noticing it more than the people working at the coalface of conservation, where the job for many seems to be the scientific documentation of an ecological obituary. A few days ago, a brief conversation with one of Ireland’s leading biodiversity scientists provided a window into that world. The big question on their mind was a utilitarian one: “How many species do we need?” Not how many have we lost, not how many need our protection, not how many can we save. How many do we actually need?

To many conservationists, this kind of question is a mind-flip that it might not even be possible to answer. Ecosystems are so complex, with many changes happening at once; we don’t know how many species we have, let alone what they are or what roles they perform; and there’s no guarantee that what we need now will be what we need in the future. To ensure the resilience of our ecosystems, of course we need all of them. But they are as much a part of the great genetic soup of life on Earth as we are, not just facilitators of human existence, and many would argue that we have no right to decide who stays and who goes.

If anything, the idea that those of us who think the most about the future of life are thinking less about how we bring humanity back into balance with nature, and more about how we engineer nature to meet the needs of humanity, should tell us just how desperate our situation really is. These choices should not be our right. But whether we like it or not, they are our responsibility.

For those of us not at the coalface, the best thing we can do to inoculate ourselves against desperation, melancholy and helplessness is to take action based on science. The reason I’ve chosen to write about barn owls this month is because this was the fifth successful breeding year for the pair that have come to call my little conservation project home.

All we did was put up an owl box and stop cutting the grass. Since then, 12 owlets have fledged the nest, local farmers have stopped using rat poison, local children have dissected owl pellets and written colourful school projects, and every year I’ve watched them learn to fly and hunt, and felt the rush of excitement and hope that maybe, just maybe, they’ll thrive.

Hannah Hamilton is a sustainability consultant specialising in biodiversity, conservation and environmental communications@theriverfield