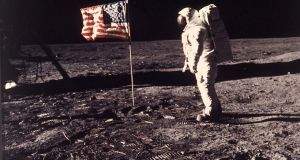 As Neil Armstrong stretched his moon boot towards the lunar surface he was not surprised to find it solid and irregular. Photograph: AP Photo/Neil Armstrong, NASA

Last month marked the 50th anniversary of Neil Armstrong’s walk on the moon. The sciences of the 20th century allowed humans unprecedented access to a celestial object that has fascinated humankind for as long as we have written records. Armstrong trod on a surface that many before him had speculated about. If you are curious about the moon landing of Apollo 11, I encourage you to look at NASA’s excellent website about the mission (nasa.gov).

The anniversary also provides an opportunity to reflect on past understandings of the moon’s surface before any human imagined it might be possible to walk on it.

The moon was thought to be unlike earth in its perfection, existing in the realm of a perfect God

As Armstrong stretched his moon boot towards the lunar surface he was not surprised to find it solid and irregular. Satellites orbiting earth had photographed the surface of the moon, and scientists had named some of the most significant craters. Only a few centuries before Galileo had risked ridicule when, based on telescopic observations, he suggested that the moon’s surface was not smooth.

Galileo’s drawings of craters on the moon were revolutionary because of the persistence of ideas about celestial objects. During the middle ages and the Renaissance, most people who considered the nature of the moon assumed that it was a perfect sphere with a smooth surface. Because the moon existed in the heavenly realm, above the earthly one, most people (astronomers included) believed that it must be perfect. This belief was based on the writings of Aristotle, who had also established the geocentric view of the universe. Aristotle’s perfect celestial bodies and earth-centered cosmos had also become key components of the Christian understanding of the universe. The moon was thought to be unlike earth in its perfection, existing in the realm of a perfect God.

Nonetheless Galileo did not see perfection when he looked through his telescope at the moon in the early 17th century. He saw instead a surface that reminded him of earth. Others had explained the appearance of light and dark patches, or even the “man in the moon”, as the consequence of how the perfect crystalline substance of the moon reflected light. Galileo, however, saw mountains and valleys that looked terrestrial and not celestial. He noted how the shadows cast on the moon’s surface changed over the course of hours just as the shadows cast by mountains changed on the earth’s surface.

Galileo’s ideas soon appeared in artistic form. Only a year after the publication of Sidereus nuncius, the artist Lodovico Cigoli, in his commission for the Sancta Maria Maggiore chapel in Rome, chose to depict Mary standing upon a moon with Galileo’s pitted and pocked surface. This was significant for a number of reasons. Mary’s perfection and virginity had been associated with the pristine moon in religious commentary and in religious art. Further, Galileo would soon clash with the Church over his astronomical views and we might have expected objections to this new understanding of the lunar surface. Finally, Cigoli seems to have observed the moon’s surface himself through a telescope indicating the spread of Galileo’s ideas and practices of observation among some Italian elites.

The moons drawn by Galileo in Sidereus nuncius would have appeared somewhat familiar to those astronauts embarking on the Apollo 11 mission. Although not drawn with perfect accuracy, Galileo’s large craters match up with those captured by lunar photography centuries later. He did not create a map of the moon’s surface and the moon was simply one of a number of examples of the possibilities for astronomical observation enabled by the telescope that he described in his book.

Even before Galileo, two English astronomers had also begun to map the surface of the moon. Thomas Harriot’s observations of the lunar surface with a telescope had commenced in 1609, at least a year before Galileo’s. Harriot was less interested in the three-dimensional surface and more interested in sketching the boundaries of apparent land and oceans. Like Galileo, Harriot saw the moon as earth-like. William Gilbert also created a lunar surface map during the early 17th century.

Harriot, Gilbert and Galileo had all expected that if the moon had a surface like the earth it would contain life like the earth. Such an expectation had disappeared by the time Neil Armstrong stepped out on to the moon but I wonder if the possibility might have crossed his mind, even for a second as he stepped out into the known unknown.