Over 500 projects on topics including gender diversity, pollution and climate change on show 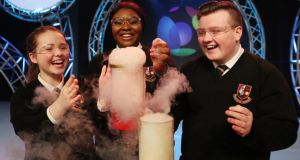 From left to right: Sophie Kelly (16), Rachelle Biayi (16) and Karl Fitzpatrick (15), from Pobalscoil Neasain in Baldoyle, Dublin at the launch of the 55th BT Young Scientist & Technology Exhibition 2019 at the RDS Photograph: Niall Carson/PA Wire

Thousands of students from across the island of Ireland are descending on Dublin’s RDS for the 55th BT Young Scientist & Technology Exhibition (BTYSTE) which begins on Wednesday.

There are many projects include on topical issues such as gender diversity, cervical cancer screening, plastic pollution and climate change. The exhibition opens to the public from tomorrow to Saturday, with some 50,000 visitors expected to attend.

There are 550 projects on show across four categories: technology; biology and ecology; social and behavioural sciences; and chemical, physical and mathematical sciences.

Students are competing for the overall title of BT Young Scientist & Technologist(s) of the Year.

Coláiste Choilm in Co Cork has the largest number of projects, with 17 featuring. Last year’s winner Simon Meehan, who discovered a natural antibiotic in a blackberry bramble plant in his back garden, attends the school in Ballincollig.

President Michael D Higgins will open the exhibition. He has paid tribute to the competition’s ability to provide a platform for young people to showcase their talents, saying the event is “at the pinnacle of scientific achievement and discovery amongst young people worldwide”.

Shay Walsh, managing director of BT Ireland, which organises and sponsors the exhibition, said that since 1965, more than 750,000 people had visited it.

This, he said, illustrated “how fascinated people are by the limitless possibilities of science and technology”. He welcomed “the next wave of future scientists and entrepreneurs” to the RDS.

“Over the next few days the students will have the experience of lifetime, presenting their projects to some of the most renowned scientists and technologists in Ireland as well as the public,” he added.

The winners will be announced at an awards ceremony on Friday. The overall winner(s) will receive €7,500, the BTYSTE perpetual trophy and will go on to represent Ireland at the EU Contest for Young Scientists in Bulgaria this September.

The exhibition will also showcase the best in Irish science and technology, and host a festival of science and innovation with guest appearances from tech entrepreneurs such as Steve Collins, a renowned developer and cofounder of Havok video game company, and Azeem Azhar, an AI commentator and tech influencer.

Taking place alongside the exhibition is the Primary Science Fair.

Now in its 17th year, it brings hundreds of primary students from across Ireland to the RDS from Thursday to showcase their projects.

As well as the projects on display, more 20 shows a day take place during the exhibition for students and visitors, including “Space: The Next Frontier”, a 3D spectacle celebrating 50 years since the Apollo moon landing, highlighting development of manned space flight.

Tickets: Bookings must be made at btyoungscientist.com.

App: Available for Android and Apple devices, it includes an exhibition map, a search tool for projects, a schedule of events and links for live updates.