Living Architecture: Investigating the interface between biology and architecture – a new vision for homes and cities 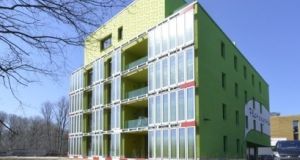 Arup’s BIQ building in Hamburg has a bioreactor façade or photosynthetic curtain which uses microalgae to control light, provide shade from the sun and generate heat for hot water or internal heating.

Some scientists spend years manipulating and analysing microscopic biological, chemical or physical interactions in the hope of seeing something new that can increase our knowledge of metabolic processes – particularly when they go wrong. Others dream up new experiments which investigate how metabolic processes could be used for new purposes that many of us haven’t even imagined.

Dr Rachel Armstrong, professor of experimental architecture at the University of Newcastle in England, is in the latter category. Her experiments aim to discover how biological interactions could be used for functions we currently assign to other materials. In her research, she investigates a new approach to building materials which uses biological processes to create light, heat and waste disposal in our homes. She calls these metabolic interactions “living architecture” and develops prototypes to examine how they could be incorporated into homes and cities in the future.

A medical doctor who then did a PhD in architecture at the University of London, Dr Armstrong merges her knowledge of medicine, synthetic biology and sustainable design. She seeks to invent new technologies and paradigms for future building materials.

“Why do we as living things inhabit dead things?” Dr Armstrong asks her audience at the Cool Planet Experience in Co Wicklow, where she came to launch Vodafone Ireland’s sustainable business report recently. “Why can’t we use our buildings to process waste, clean water and produce electricity? Why can’t we have homes that gurgle like a stomach and smell like a garden? Why can’t we use bacteria to help us reduce our dependency on fossil fuels?” she continues.

By way of example, Dr Armstrong talks about how she and her team are developing a prototype for a “living brick”. “The idea is to combine structure with process using the bacterial world as agents. There are photosynthesising organisms that use carbon dioxide to transfer household waste into biomass. There are also anaerobic creatures which can take waste water and turn it into electricity and clean water,” she explains.

Dr Armstrong proposes to make a biological brick with two bacterial layers – one colony which uses photosynthesis to create sugars which pass through a membrane into a dark structure of microorganisms which builds a sort of biological rock.

It all sounds somewhat fantastical but Dr Armstrong is keen to point out that some of the materials she is exploring have already been tested. For example, urine from toilets at the Glastonbury Festival has been used to power mobile phones and digital displays. “In Vienna Design Week, we designed toilets working with a microbial fuel cell and portaloos for communities displaced by war in the Global South also use this technology,” she explains.

The giant Dutch company Philips also produced a prototype for a metabolic home in 2011. In it, there were bioreactors in the kitchen which used kitchen waste to produce light and heat for cooking.

Another example of using biological processes for new functions is Arup’s BIQ building in Hamburg. It has a bioreactor façade or photosynthetic curtain which uses microalgae to control light, provide shade from the sun and generate heat for hot water or internal heating.

When the algae mature, they are separated from the rest and transferred as a thick pulp and fermented in a biogas plant to generate heat in the winter months or used as biomass in the food industry in the summer months. It’s also conceivable that bacteria which create photo luminescence could be used to light corridors and hallways in our homes and offices.

Pat Barry, chief executive of the Irish Green Building Council, says Dr Armstrong’s work broadly fits in to the practice of using renewable materials in buildings and the concept of bio-mimicry, where architects use materials or design buildings that are inspired by natural processes or shapes.

“Living walls first appeared as a concept 15 years ago and they are everywhere now. Accoya wood technology is a mainstream technology which takes ordinary softwood timber and converts it into an indestructible rot-proof timber by combining with another simple substance, vinegar –ascetic acid – which changes the chemical composition of the wood,” Barry says.

He also points to the Bosco Verticale [Vertical Forest] residential towers in Milan, where 900 trees and more than 2,000 shrubs have been planted around its façade to purify the air. “It looks great and architects love this but then if you look at the amount of structure that is required to support soils and trees you have to question whether it would have made more sense to plant trees on the ground around the tower,” Barry adds.

Prof Jennifer McElwain, head of the Botany Department at Trinity College Dublin, says it is really important that biologists and architects work together to address the grand challenges of climate change. “Architects have the potential to incorporate green solutions which will take carbon out [of the atmosphere] and generate energy from non-fossil fuel sources. There is a group of researchers in Trinity looking at nature-based solutions for the fabric of our buildings and our cities. We also know that when you use biology in the fabric of buildings and cities, it also changes people’s behaviour for the better. When people are exposed to nature and co-create nature-based solutions, they appreciate their environment more.”

Dr Armstrong says her ideas and prototypes are no longer speculative. “It should be possible to build libraries of microbial programmes to create microbial fuel cells and metabolic maps to share.”

She is the coordinator for the €3.2 million Living Architecture project, a collaboration of experts from the universities of Newcastle, UK, the West of England (UWE Bristol), Trento, Italy, the Spanish National Research Council in Madrid, LIQUIFER Systems Group, Vienna, Austria, and EXPLORA, Venice, Italy, that began in April 2016 and runs to April 2019. One of the missions of the Living Architecture project is to create a solution for Venice, the Italian city which is gradually sinking into the lagoon which surrounds it.

“The idea of the Future Venice project is to create an artificial reef out of limestone co-created by photo-phobic microorganisms which could be directed underneath the city. These microorganisms take sediment in the water and leave tiny skeletons which in time develop into tiny rocks which then interact with the marine life,” Dr Armstrong says. The premise for the Future Venice project is based on the existence of naturally occurring microorganisms that form mineralised structures known as thrombolites.