Lessons from potentially habitable planets could have deep resonance 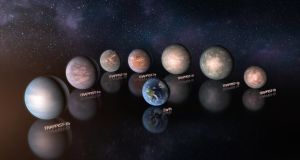 This artist’s impression compares the seven planets orbiting the ultra-cool red dwarf star Trappist-1 to the Earth at the same scale. They are shown to the same scale but not in the correct relative positions. Image: M Kornmesser/ESO

The Pythagoreans believed that the planets generate sounds as they move through the cosmos. The idea of the harmony of the spheres was brought to a high level by Johannes Kepler in his book Harmonices Mundi, where he identified many simple relationships between the orbital periods of the planets. Kepler’s idea was not much supported by his contemporaries but in recent times astronomers have come to realise that resonances among the orbits has a crucial dynamical function.

Resonances can greatly increase the stability of planetary configurations by preventing close encounters and collisions. In our solar system, Neptune and Pluto are in a 3:2 resonance. For every three orbits of Neptune around the sun, Pluto completes two orbits. Recently a remarkable resonant system has been discovered orbiting a far-away star.

Many if not most stars are orbited by planets, just as the sun is orbited by the Earth. There are probably billions of exoplanets in our galaxy, about the same size as the Earth and with similar surface temperature. The evidence of exoplanets is indirect but, with new telescopes, we’ll be able, within 10 or 20 years, to observe some of those Earth-like planets directly. This should tell us if they have continents and oceans, and reveal any signs of life.

The star Trappist-1A, located about 40 light years away, is one-twelfth the size of the sun. This star is orbited by seven planets similar in size and mass to Earth. All the planets cross the face of the star, and they were discovered from the regular shadows that they cast during transit. This enables us to measure their orbital periods and calculate their sizes.

Trappist-1A, only slightly larger than Jupiter, is an ultra-cool dwarf, much weaker than the sun but, since the planets are closer to it, they receive an amount of light similar to the planets in the solar system. The seven planets form a Laplace resonance-chain: their orbital times are in small-number ratios, with three-body resonances linking every member.

For every two orbits of the outermost planet, the next one in completes three orbits, the next one completes four, and so on. The full sequence is 2, 3, 4, 6, 9,15, 24, giving ratios between orbits of 3:2, 4:3, 3:2, 3:2, 5:3 and 8:5. The simple whole number relationships between the periods are similar to the ratios between musical notes that produce pleasant and harmonic sounds. These resonant ratios keep the Trappist-1 system stable.

All seven planets of Trappist-1 are temperate and could sustain liquid water. Three of them appear habitable, receiving about as much energy as the Earth receives from the sun. Life on a Trappist planet would be fascinating. The central star would appear very large and neighbouring planets would appear as large as our moon, but move across the sky much faster.

Astrologers believe that different ages, lasting about 2,000 years, result from the precession of the equinoxes, a slow wobble of the Earth’s axis. An age is determined by the zodiacal constellation in which the sun is located at the vernal equinox. It seems we are now in the Age of Pisces, to be followed by the Age of Aquarius. The date of commencement of the new age, according to different calculations, ranges between AD1447 and AD3597, giving us some flavour of the precision of astrology.

Trappist-1 is in the constellation of Aquarius. Many astrologers argue that the Age of Aquarius is the time when human consciousness is greatly expanded, truths are revealed and we gain control of our destiny. Let us hope that in 2019 “peace will guide the planets and love will steer the stars”.