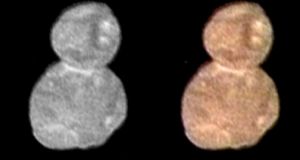 The first high-resolution images of a 35km-tall snowman-shaped object that lies one billion miles beyond Pluto have been released by Nasa.

The photographs of Ultima Thule, captured by the New Horizons spacecraft, were revealed at a press conference on Wednesday.

The dark object is made up of two spheres which have combined to form one celestial object.

Alan Stern, principal investigator for New Horizons, said: “It is only really the size of something like Washington, DC, and it is about as reflective as garden-variety dirt.

“It’s a snowman if it’s anything at all.

“I don’t think we have stressed enough, so I really want to say, what this spacecraft and this team accomplished is unprecedented.

The images released so far are “just the tip of the iceberg”, he said.

It will take nearly two years for New Horizons to beam back all of its observations of Ultima Thule.

Among the images Nasa scientists on Earth are hoping to receive are “higher-resolution views” of Ultima Thule, as well as pictures taken when the sun is at a better angle for viewing the object.

However, the photos that have already been sent back have revealed some of its properties.