The fight to save the world’s most endangered cat 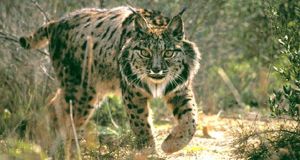 By 2002, the Iberian lynx’s population had crashed to just 94 known individuals in the wild.

Under the merciless Andalusian sun, the hills west of Santa Elena in southern Spain betray few signs of life. An army of unseen cicadas hum in unison when Olisippo, a two-year-old male Iberian lynx, bounds silently out of his den at the La Olivilla breeding centre. He stops, staring intently at me; there is a keeper standing nearby but his is a familiar scent. I, on the other hand, clearly merit caution. Even in captivity, we’re lucky to catch a glimpse of this extremely rare feline. At this time of day, in this heat, the cats are usually resting.

Olisippo represents much of what has gone right for the Iberian lynx, the world’s most-endangered cat and Europe’s most-threatened predatory animal. Throughout the 20th century poachers hunted it, and diseases that decimated its prey, the European rabbit, spread like wildfire. New highways constructed in once-isolated corners of rural southern Spain and Portugal saw dozens killed by vehicles every year. By 2002, its population had crashed to just 94 known individuals in the wild, leaving the Iberian lynx on the cusp of extinction.

The catastrophic future facing the lynx moved conservationists into action. With financial backing of almost €70 million from the European Union’s Life programme and elsewhere, the Iberlince Lynx Conservation Programme has single-handedly turned this shy, elusive cat’s fortunes around. By 2011, five breeding centres were set up across the Iberian Peninsula – four in Spain and one in Portugal. The La Olivilla centre, 40km from the huge, 748sq km Andujar Natural Park in northern Andalusia, is the largest.

María José Pérez Aspa, a technician with the Andalusian government and resident vet at La Olivilla, says that during 2018 the programme succeeded in raising and releasing 39 cubs, in January and February. Between 75 and 80 per cent usually survive their first year.

But rearing cubs in captivity can be fraught with difficulty. Birth is a high-risk time with epilepsy a major concern, affecting up to 10 per cent of cubs, though careful pairing of breeding males and females helps to counter this. There’s also a sinister rite of passage cubs pass through that marks the Iberian species out as one of the most aggressive of the lynx family: when a litter is about six weeks old, cubs often embark on a series of violent episodes sometimes referred to as “early spontaneous sibling aggression”, that sees one or more attack a sibling that can sometimes result in death. As a result, fighting cubs must be separated, meaning they are handled by staff multiple times a day.

Working with adults is even more difficult. “Any problem, a small injury or a suspected illness, necessitates them to be placed under anaesthesia,” says Pérez Aspa. “For that reason, the quality of their food must be excellent.” Once a week, a keeper enters the lynx’s quarters to take away food remains but does so in an animated fashion to scare the lynx and imprint on them the idea that humans should be avoided.

“On these days, the lynx refuse to eat anything,” Pérez Aspa says.

By 2010, the conservationists’ work had begun to pay off and the lynx’s population started to recover. A total of 185 young lynx have been released into the wild over the past decade.

Of the four species of lynx, the Iberian variety doesn’t particularly stand out. It has a white beard drooping from either side of its mouth and males can weigh up to 14kg, making them smaller than their Canadian and Eurasian relatives. What is outstanding, however, is the world in which the Iberian lynx once roamed, and its place in it. Such was the prevalence of rabbits in ancient Spain that it was named Ispania – land of the rabbits – by the Carthaginians in about 300 BC. That likely explains why Iberian lynx are almost entirely dependent on rabbits as a food source.

The breeding programme makes up just one aspect of the broader effort to save the lynx. With the goal to release captivity-bred juveniles into the wild, cubs must first undergo extensive hunting practice. Live rabbits are introduced to their enclosures via tunnels similar to actual rabbit burrows. Cubs are monitored by cameras and their hunting ability is assessed, which helps co-ordinators decide which individuals are best suited for release.

“It’s easier to kill a rabbit than to hunt a rabbit,” says Perez Aspa. “We have to see that the cub knows how to wait, because when they are very young, they go straight to the burrow to try catch the rabbit, but they can’t reach or hunt them. Their mothers must teach them to wait.”

In the past hunting, trapping and myxomatosis outbreaks were the biggest threats to the wild lynx population, and even as conservation has brought the species back from the brink, its future is far from secure: Although myxomatosis has threatened rabbits since the 1950s, the rabbit haemorrhage disease virus (RHDV) that first appeared in Spain three decades ago is thought to kill 75 per cent of the rabbits it infects in their burrows. More bad news has followed.

“The RHDV mutated in 2012 into RHDVb and now its way of acting is different,” says Miguel Angel Simon, the director of the Iberlince Lynx Conservation Programme. “The first RHDV killed adult rabbits and now, RHDVb kills young rabbits.” In 2012, vaccinated kits on Spanish rabbit farms were found to have succumbed to the virus; terrible for rabbits and bad news for the lynx, too.

Securing access to sufficient supplies of prey aside, additional dangers await the cat in rapidly modernising southern Spain and Portugal. Traps laid to catch foxes are also killing lynx, while just last month, a mother and daughter pair drowned in an irrigation pond in Portugal. Over the past five years, close to 100 have been killed in road accidents. As a result, the Iberian lynx is still threatened with being the first feline to become extinct since the sabre-toothed tiger 10,000 years ago.

Still, the people behind the project are upbeat. The lynx’s total number now stands at about 625 individuals following what is widely regarded as one of the most successful reintroduction programmes in the world.

Culverts and ecoducts that cross under or over highways used by lynx are under construction. Angel Simon, who previously worked on a conservation programme for bearded vultures, says that establishing reintroduction areas of at least 15,000 hectares, with high densities of rabbits, is crucial to the lynx’s survival. The success of the breeding and release programmes now means conservationists’ focus can shift to securing access to land.

“We are working with 22 partners: hunters’ associations, conservationist associations, private companies and official administrations,” says Angel Simon. “We have continued signing land stewardship agreements and involved the local communities, and in this moment, we have about 400,000 hectares of land to work with.”