Spare Parts: Going out on a limb in the name of science 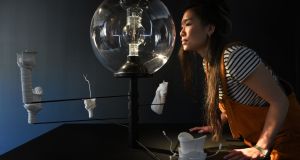 An exhibition running at Science Gallery London explores a futuristic world where you could print out your own heart, or commission a new body part to your own design.

But what if you could hold your own heart in your hand, a life-size model of the organ that pumps blood to the tissues, that literally keeps us alive? What would that do to our sense of our bodies? And, in practical terms, what would it mean for cardiologists making a diagnosis, or planning a surgery or transplant?

Big Heart Data is one of the installations at a new exhibition called Spare Parts that poses those questions, and provides possible answers. It’s just the second exhibition season at the new Science Gallery London, based at Kings College, which follows in the pioneering footsteps of Dublin’s Science Gallery. Spare Parts examines organ transplantation and tissue regeneration, through the creative responses of world-renowned artists and designers.

Big Heart Data demonstrates how software could visualise the future development of an individual’s heart, enabling clinicians and patients to plan early interventions. King’s College cardiology researcher Dr Pablo Lamata works on mathematical modelling, which, combined with new imaging technologies, can help cardiologists take better decisions. “The shape of your heart is a reflection of what it is going through, and can affect how the heart copes with disease,” he says.

Lamata collaborated with designer Salomé Bazin of Cellule, a design studio focused on healthcare innovation. The result is 50 white hearts, printed in 3D, lining one of the walls of the exhibition. The hearts are based on individual scans from healthy volunteers. The exhibition also features one healthy foetal heart, a 3D model of the heart within the womb.

“I find them really beautiful, really compelling,” says Lamata. “We all have different faces, which is how we recognise each other. What we’re trying to illustrate here is that the faces of our hearts are different too.”

“This is what we call speculative design, trying to design a narrative of what the future could look like,” says Bazin, who believes it may help us to change our behaviour and take better care of our hearts. “Psychologically it’s huge, being empowered to take part in the conversation, get closer to our bodies,” she says. “We need doctors to repair us, but if we knew more we could and would do certain things ourselves.”

Big Heart Data is just one of the innovative projects commissioned by Spare Parts. While some of the exhibits could have practical applications in the near future, others were commissioned to stimulate conversation and ethical debate about whether our bodies can be a sum of independent parts that are regenerated, enhanced, donated or altered.

One such exhibit is Prosthesis – simulation kit of externalised brain tissue, which displays 12 possible brain prosthetics accompanied by a soundtrack imagining a fictional future where brain extensions regenerate lost functions of our brain.

Even Brexit gets a look-in, obliquely at least. New Organs of Creation is a sound installation that aims to “heal the divided voice of Britain” using voices from across the country talking about their hopes for the future. The project involves marrying these collective voices with the latest stem cell technology, creating an artificial voice generated by a bioengineered vocal box.

Instead of an injured face being repaired exactly as it was before, perhaps there is a way to do something more creative

At The Gut, visitors can explore the art and science of human repair first-hand, splicing cacti to help understand tissue grafting, and stitching electrodes that can help send instructions to prosthetic limbs.

Crafting the Body, by Amy Congdon, explores the possibility of “couture” body parts, according to exhibition curator Stéphanie Delcroix. “So instead of, say, an injured face being repaired exactly as it was before, perhaps there is a way to do something more creative.”

Using traditional textile techniques and materials with differently sized threads to attempt to control the growth of cells, the installation suggests a future in which patients will be able to grow a living ornament as a replacement for a damaged body part.

Lucy Di Silvio is professor of tissue engineering at Kings College and has collaborated with Congdon for eight years. “I got a phone call from Amy when she was at Central Saint Martins. I said you must have the wrong number. She was very persistent, and I’ve learned so much from working with her.”

Tissue engineering involves growing cells on a matrix in such a way that they are cued to form an organised array – ie a tissue. Creating the hierarchical structures of tissues requires an understanding of normal repair mechanisms using natural materials, so that scientists can then create biomimetic materials that are acceptable to the body.

“Surface micro-architecture of biomaterials determine their ability to integrate within the body, and can be tailored to drive a specific cellular response,” says Di Silvio. “This can be compared to crafting textiles. For example, embroidery on a natural material such as cotton or silk can mimic natural structures found within the body, and cells have been known to align in a specific manner.”

While many of the exhibits suggest a future where humans take ever more control of natural processes, Spare Parts also addresses issues surrounding the risks posed to the natural world, and to our survival, by our current lifestyles.

Hivecubator 3.0, by artist and beekeeper Michael Bianco, highlights our interdependence with bees. A DIY incubator is designed to care for living tissues grown in vitro, with the survival of the cells dependent on the health of the bees that live within the incubator.

Even as we envisage a world involving greater personalisation of our bodies and their repair, it’s a healthy reminder that it’s not all about us.

“It’s important that we recognise that we are not necessarily the centre of the universe,” Delcroix adds. “It teaches us to be humble.”

Spare Parts runs at the Science Gallery London until May 12th https://london.sciencegallery.com/