Will this be one of our last years to spring forward? 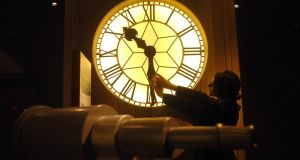 A gallery assistant at the Royal Observatory, adjusts the minute hand of a turret clock inside the observatory, in Greenwich, London. Photograph: Johnny Green/PA.

It is the time of year when we all begin to be thankful for the “grand stretch in the evening”. The signs of spring are not just daffodils and bird chatter but also more daylight, culminating in the gloriously long days of summer that almost compensate for the miserly short days of winter.

As the springing forward of our clocks approaches, so does the possible end of daylight savings time in the EU. The European Parliament is considering doing away with the system in 2021, with the overwhelming majority of European citizens in favour of staying on “summer time” throughout the year.

This complex, regulated system of civil time, based on relationship to Greenwich mean time, has its origins in the end of the 19th century. Civil time, or a government-mandated time, was gradually introduced in most countries in order to solve the problem of the variations of local time.

Local times were roughly based on solar time, where noon is the highest point of the sun. However, a solar day varies slightly from 24 hours over the course of the year and thus clocks have to continue to be adjusted. Further, local time would vary a noticeable amount with every degree of longitude you travelled in distance. Moving from town to town might involve a constant change of local time.

A number of different groups began to view the variety of local times as problematic. Scientists wished to be able to accurately record the time of occurrence of significant events globally such as earthquakes or the appearance of comets. Railway officials needed not only to communicate the times of departure and arrival to customers but they needed to avoid accidents when trains had to change tracks or pass one another. The postal service sought to standardise the delivery times of post.

The solution in all cases was to choose one solar mean time as a standard. The railways in Britain, for example, adopted their own standard time and travellers needed to know the difference between railway standard time and their own local time to be sure not to miss their train. Scientists and the postal service chose the Royal Observatory at Greenwich (which had long been used to set chronometers or timepieces used on ships to calculate longitude). Gradually businesses, including railways and telegraph offices, also adopted Greenwich mean time as the standard.

In 1884 an effort was made to establish Greenwich as the International Prime Meridian, so that all local times would use Greenwich mean time as their reference time. The globe would be divided into 15 degree segments of longitude or one-hour time zones. Global times would become a difference from Greenwich mean time. In fact a US secondary-school teacher, Charles F Dowd, had proposed a similar system of 15 degree meridians in 1870 to solve the problem of railway timetabling.

This was slow to get off the ground. The French objected that they preferred to use Paris as the reference time and wondered why they should accept a British-regulated system of time when the British still insisted on using yards and miles instead of the metric system. By 1899, when the Royal Geographical Society reproduced a table of global times relative to Greenwich mean time, Irish time was 25 minutes and 22 seconds “slow”. In 1916, Irish time was brought into line with Greenwich, to considerable protest from some Irish nationalists.

Other parts of the world, including other portions of the former British empire, were even slower to follow. “Bombay Time” was still kept until at least 1950. Standard civil time, especially one based on London as “prime meridian”, was inherently political.

Not content with the rational system of one-hourly time zones, scientists and government officials continued to meddle with time. Daylight savings time was introduced as an experiment several times in different parts of Europe and the United States during the early 20th century and again during and after the second World War.

It was considered a fuel saving measure during the war and was sometimes called “War Time”. After the war it was repealed in many places but gradually reintroduced from the 1960s and 1970s. It was only made standard EU policy in 1996. A number of recent studies have suggested that daylight savings time is associated with higher levels of accidents and lower levels of physical activity. Combined with popular dislike, this may be enough to change time again.