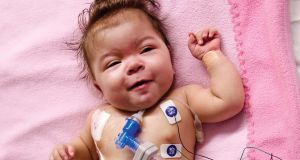 For a parent of a critically ill child, watching a ventilator going about its work can be what keeps hope alive. Moment by moment a ventilator does the work for tiny lungs that struggle to breathe on their own.

Paediatric acute respiratory distress syndrome (Pards), which can arise due to pneumonia, trauma, premature birth or other causes, is a difficult condition to manage in intensive care units. While Pards is rare, it carries a mortality rate of about 35 per cent, according to Dr Cormac Breatnach, consultant paediatric intensivist at Our Lady’s Children’s Hospital in Crumlin. And while mechanical ventilation can be a life-saving intervention, the forces and stresses involved also carry risks of long-term damage to the lungs.

“The problem with managing lung disease is that you’re hurting the organ you’re trying to help,” Breatnach says.

Now new research using computer simulation has shown that there is scope to reduce that damage. It’s a collaboration between doctors and engineers, and was recently published in the journal Intensive Care Medicine, which normally focuses on clinical trials. It’s yet another sign of the growing interest in the use of engineering techniques in medicine.

Irish researcher Dr Declan Bates, professor of bioengineering at the University of Warwick, had previously experimented with simulating changes in ventilator settings in adults and wanted to find out if the same approach could be applied to children.

“Our evidence suggests that patients may be being over-ventilated,” says Bates, who originally studied at Dublin City University. “You can understand why clinicians do this. When you’re trying to keep people alive you don’t want to take chances, so you will add in a safety buffer.”

Bates spent a day emailing paediatric researchers around the world to see if anyone would be interested in collaborating on a project that would use computer simulation. The only person who replied was Dr Nadir Yehya, but he came with access to a huge dataset from the Children’s Hospital of Philadelphia, where he is assistant professor of paediatric anaesthesia and critical care.

“We’ve known for years about ventilator-induced lung injury,” Yehya says. “But children need ventilation because it’s life saving. When you get certain kinds of infection, say really severe pneumonia, the lungs swell up and become stiffer. The ventilator provides counter pressure, but that process in and of itself can be damaging. We’re not designed to breathe that way”.

Yehya gathered data from several hundred children under four who passed through intensive care at the hospital between 2011 and 2016, and who had undergone mechanical ventilation.

“People don’t love the idea of experimenting on children, so I was interested to find out can we do it in a simulated way, and that’s what Declan was able to do.”

Bates and his team at Warwick then built a model to develop, test, and directly compare strategies that could implement more protective ventilation. The analysis was carried out using a computer simulator that included representations of multiple interacting organ systems, and a high level of physiological detail including multi-alveolar compartments, multicompartmental gas exchange, interdependent blood gas solubility and a range of other factors.

The model was calibrated against the individual patient data from the Philadelphia hospital on arterial blood gas contents, airway pressures and ventilator settings. A comprehensive range of parameters was taken into account, including respiratory quotient, total oxygen consumption, respiratory rate, and haemoglobin.

“All the strategies we used are based on rational responses, what a clinician would do,” Yehya adds. “You could turn the ventilator settings down if you were concerned you were doing damage, but the reason people generally don’t, is that there isn’t a predictable response. What we’ve demonstrated with this model is that you can turn the settings down safely.”

The next step will be to test the algorithms in real patients. Yehya is now in the process of applying for funding and consent for preliminary clinical trials, something that is difficult to do in an intensive care setting.

What the project illustrates is the potential of computer simulators to complement clinical decision making. Bates envisages a closed loop control algorithm, which could make constant tiny adjustments to ventilator settings in response to changes in the state of the patient. “It would be something like an autopilot system, which could provide individualised treatment.”

Breatnach is positive about the research and the underlying issue it is trying to address. However, he cautions that there is some way to go. “There is enormous variability in how illness manifests between individual children and over time. Also, targets such as smaller tidal volumes [breath size] are merely surrogates for meaningful outcomes such as improved survival rates with reduced long term morbidity.”

Despite these barriers, Breatnach believes that work such as this could be the basis for the development of fully automated closed-loop systems directed by artificial intelligence algorithms. These could potentially offer a degree of responsiveness and precision well beyond that which a human carer can deliver.

“If you got the algorithm right, so that you got gentle ventilation that was helping the lung without harming it, there would certainly be advantages,” he says. “It would need to be reading and responding in a very timely manner.”

In the future a parent watching a ventilator at work may take it for granted that data being fed from their child to the ventilator, in real time, is fine-tuning the task of keeping their child alive, and helping them recover.