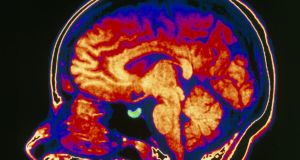 What makes you you? Much of our personality can be pinned on our genes, and almost none of it on our upbringing or experiences.

This is the view of Prof Kevin Mitchell, a geneticist at Trinity College Dublin who has written an engaging science book, Innate: How the Wiring of Our Brains Shapes Who We Are.

There is evidence for environmental factors such as nutrition influencing intelligence, but personality forms inside. “Our traits stay much the same. If you are a shy person you will remain shy,” says Mitchell, whose book explores the science of building a brain.

Genes do not determine who we are, and there is no gene for extroversion or conscientiousness. Instead, the influence of our DNA is more subtle. Genes are recipes for the machines of biology – proteins – which can vary slightly between us and near relatives. Thousands of proteins then guide nerve connections, but how this happens is a powerful influence.

This hits upon a major theme of the book – the importance of how development plays out in sculpting our brain. “You could have the exact same genome, with a programme for development within it, but yet it doesn’t decide on an outcome,” Mitchell says. “It just encodes lots of rules and interactions.”

TCD genetics professor David McConnell reminded those at the book’s launch that the brain is a stunningly complicated structure. It is estimated that 86 billion neurons are formed before a child is born. Brain wiring proceeds through biochemistry, but critically this is buffeted by random events.

Identical twins, while sharing the same genes, clearly have different brains. This is true also of their faces, which are never mirror images. “We can even see this in our own faces. If you look at your right and left side, those are not identical, though they developed from the same genome,” Mitchell says.

Random effects exert an influence. There is loads of opportunity, given that a fertilised egg forms a brain via billions of cells that grow, divide and move around.

Meanwhile, evidence points to your family environment having no bearing on personality. Twins who are reared in a family are not more similar than twins reared in different families. “Adopted siblings are basically no more similar in personality than any two strangers in the street,” he adds.

Parents might bristle at this idea, but it doesn’t downplay the importance of upbringing. Family environment contributes to our behaviour, our character and the way we adapt to the world, Mitchell notes, “so parenting has a major contribution”.

“Though our personality stays the same, our behaviour does change with our experience,” he says. Neuroscientists now view the brain as far more plastic than once assumed. It shifts with experience, much like a muscle changes with exercise. Personality also helps us choose experiences that may reinforce our traits.

Biological differences matter. Our genes contribute to the structure and neurochemistry of our brain, in ways that affect our psychology and behaviour. And though there are no brain circuits for conscientiousness, there are circuits and brain chemicals that control risk avoidance and our sensitivity to reward. These circuits can be chemically altered in lab mice, for example, making them more or less fearful.

Emotions and brain hormones also guides which memories we keep. “We want to remember things that are important to us,” Mitchell points out. There is a trigger that says to our brain, ‘Yes, you should remember this’ – mediated by hormones like dopamine and serotonin. If you have an emotional reaction to an experience, such molecules can trigger the brain to become more plastic and etch in those memories.

The book Innate weighs differences between the male and female brain, and finds a difference in personality scores. “As a group, females score slightly higher, so are slightly more neurotic, more conscientious and so on,” Mitchell explains. Like so much else in genetics of human populations, this statement rests heavily on statistical averages. You cannot guess someone’s sex based on their personality.

A more significant difference is that the developing male brain is more vulnerable. Or, to put it another way, the female brain is more robust. “Everything has more of an impact on males, even obstetric complications affect male foetuses more than female,” Mitchell says. “And we know that mutations that are associated with conditions like autism manifest much more strongly in males.”

One reason is that females have two X chromosomes, whereas males have one. This means for girls genes on the X chromosome come as pairs. If one produces a faulty protein, there is a back-up copy. If there is a fault in a gene in a boy, the mutation will have a more severe impact, as there is no second gene.

He contemplated a book chapter on dark character traits, exploring the biology of extreme narcissism and psychopaths. “As a personality profile, psychopathy is quite definable,” he says. “But I find the science largely unsettled.” Unlike personality traits, it does not form a normal distribution: a bell-shape graph with the majority of people in the middle. Instead most people score zero or one on a scale of psychopathic tendencies, while a few score 15 or 20. “Those are the people who can be really dangerous,” he explains, but it is difficult to test heritability.

Prof McConnell predicts Innate will be an influential book, which is rare in Irish science. “Not many of my colleagues over the last 50 years have written a book which is widely read on such an important matter,” he says, praising its author as Ireland’s first neurogeneticist. He recommends the book for lay people, but also psychologists, social scientists, policy makers and educationalists. It was also praised by psychologist Steven Pinker at Harvard as “a new landmark in the debate” about the influence of nature and nurture.

The take-home message from Innate is that our brain is guided by genetics, but the trajectory of its development introduces variability and can itself be deflected to a new course by small, random events.

This means that who we are comes from inside us more than we might have thought. “This non-genetic component of variation does not necessarily have to be things that happen after a person is born,” Mitchell says. “A lot of it could be developmental, which means those traits could be more innate than even the genetics would suggest.”

No matter what advances are made in cloning, brain wiring is so complex and contingent that there is no possibility of ever replicating you. Your brain is truly a one-off.

THE GENE FOR NONSENSE?

We do not have genes for speech, or genes for personality, or genes for a disease. “A lot of the time I am having to undo careless phrasing that scientists used, with this ‘gene for’ shorthand,” says Prof Kevin Mitchell. A gene is always for making a protein. This protein performs a role in your body, or multiple roles.

To say the gene is for doing a task is like saying spark plugs are for driving a car. Scientists themselves though often use the phrase “a gene for”.

When they do so among themselves, they know what it means. So the “gene for” sickle cell anaemia is really just a mutation in the gene for the protein haemoglobin. Researchers are not blameless, however. It is also a useful phrase for hyping a discovery, which can be useful for attracting funding.

An example of a “gene for” that attracted attention came with the discovery of a large family affected by a condition that saw them – though of normal intelligence – unable to produce speech.

Geneticists discovered it was due to a mutation in a single gene. FOX P2 got dubbed the gene for language. “It is really a genetic mutation that affects the ability to produce speech,” Mitchell says.

But once researchers thought of it as a gene for language, they began looking for it in Neanderthals and chimpanzees, “as if a single piece of DNA could encode something like that. Of course it doesn’t,” he says. To break something can be easy, but to make something like language requires a choir of genes singing together.