Israeli cancer treatment could be something special 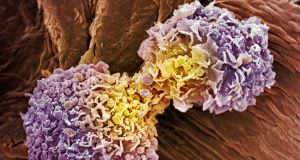 The new research is the work of a company called Accelerated Evolution Biotechnologies Ltd, based in Ness Ziona, Israel. Photograph: VVG/Science Photo Library

As we all know, cancer is a great scourge. The Irish Cancer Society website tells us that one person dies from cancer every hour in Ireland and cancer accounts for almost one-third of all annual Irish deaths.

Internationally, cancer is the second leading cause of death, second only to cardiovascular disease. Intensive research efforts have been under way worldwide since the 1970s to discover cures for the various forms of cancer. Progress has been very slow, but now Israeli researchers have announced a cure for all kinds of cancer and predict that this cure will enter clinical trials within a year (The Jerusalem Post, January 28th). This claim has been greeted with widespread scepticism internationally.

The new research is the work of a company called Accelerated Evolution Biotechnologies Ltd (AEB), based in Ness Ziona, Israel. The Jerasulem Post article reported information provided by AEB’s chairman Dan Aridor and chief executive Ilan Morad. They call the cancer treatment a multi-target toxin (MuTaTo), describing it as a cancer disruption technology of the highest order – on the scale of a cancer antibiotic. Aridor promised: “Our cancer cure will be effective from day one, will last a duration of a few weeks and will have no or minimal side-effects.”

AEB has conducted successful experiments on mice, completed several in-vitro trials and say they are close to starting clinical trials to be completed within a few years when the treatment will be made widely available. AEB claims they have not published their results so far in a scientific journal because they are generating final patents on their intellectual property.

International experts have mostly reacted negatively to the Israeli claim, pointing out that the limited tests carried out so far have been on mice, that it is quite difficult to translate success in mice into a successful human treatment, that no results have been published in peer-reviewed scientific literature and that, even if everything goes well, it will take many more years than the Israeli scientists predict before this new cure is through clinical trials and available to the general public.

Morad explained the AEB approach. Firstly, AEB set out to identify why most anti-cancer drugs either don’t work, or eventually fail, and then devised a way to get around these deficiencies. Most anti-cancer drugs attack specific targets in or on the cancer cell, thereby affecting a physiological pathway that promotes the cancer. But mutations in the cancer cell often render the target irrelevant to the cancerous nature of the cell, rendering the attacking drug ineffective.

AEB devised their new MuTaTo approach using peptides to attack the cancer cells. Proteins are polymers of units called amino acids joined together through peptide bonds in a long chain. Peptides are relatively short chains of amino acids (2 to 20) and they can be very effective at targeting cancer cells. MuTaTo uses a combination of several peptides that simultaneously target the cancer cell, combined with a strong peptide toxin that specifically kills cancer cells.

AEB claims their MuTaTo approach, attacking each cancer cell with several cancer-targeting peptides combined with a strong peptide toxin to kill cancer cells, ensures the treatment will not be affected by mutations because it kills all the cancer cells before mutations can mount an escape from the drug treatment.

Most current cancer treatments have sickening side effects mainly because the conventional drugs interact with the wrong targets or with additional targets on the cancer cells and on non-cancer cells. The MuTaTo approach is highly and specifically targeted at the cancer cells only and this should dramatically decrease side effects. AEB also promises that, when the MuTaTo technique is fully developed, it will be possible to personalise individual treatments to match the exact cancer type expressed in the patient.

Despite the widespread international scepticism that greeted AEB’s announcement, I have a feeling that AEB is on to something special. Let us hope they are.