Prof Damien Woods of Maynooth University along with scientists in the US has achieved a significant breakthrough in the emerging field of molecular computing by using DNA to develop a multi-purpose, reprogrammable molecular computer. 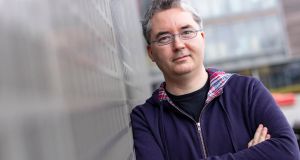 An Irish scientist, now working at Maynooth University, has helped create DNA molecules that, when combined together, can perform the functions of a tiny computer.

Prof Damien Woods is one of an international team of scientists who have successfully used the DNA created in a laboratory to develop what they describe as “a multi-purpose, reprogrammable molecular computer”.

The breakthrough has the potential to open up a new frontier in computing.

DNA is a biochemical code carrying the genetic instructions used in the growth, development, functioning and reproduction of all known organisms and many viruses. In this case it is used as biochemical hardware to drive the molecular computer.

Rather than using transistors and diodes that are deployed in the traditional computer, it uses molecules, said Prof Woods, who worked on the project with researchers at Caltech and the University of California, Davis, in the US.

They have developed 21 algorithms that perform a variety of tasks, details of which were published in the scientific journal Nature on Wednesday.

“Instead of electricity flowing through circuits, rows of DNA strands sticking together perform the computation. It’s rather like having a set of Lego bricks, some of which will spontaneously stick to other bricks,” added co-author Prof David Doty of University of California. “Select a set of bricks to start with, mix them together and watch them self-assemble into a structure.”

The molecular computer is able to perform a series of tasks, including counting exercises and drawing patterns such as zigzags, diamonds and a double helix in the DNA.

Prof Woods and Prof Doty began the work as theoretical computer scientists but they had to master biological skills to make the breakthrough possible.

DNA is of particular interest because it represents information in molecular form, is relatively easy to work with and can be constructed artificially.

“It’s a great gift the molecular biologists have given us computer scientists,” Prof Doty said.

“Think of them as tiny nano apps,” Prof Woods said. “The ability to run any type of software programme without having to change the hardware is what allowed computers to become so useful. We are implementing that idea in molecules, essentially embedding an algorithm within chemistry to control chemical processes.”

It also enables fabrication of objects on a tiny scale, he added. Their work will now be applied to a wider range of structures and facilitate development of tools for chemists and physicists.

Although silicon computers use electricity flowing through circuits to carry out tasks, the molecular computers attach strands of DNA together to make larger objects or structures that execute a programme.

The end result is a test tube filled with billions of completed algorithms, each one resembling a knitted scarf of DNA, representing a read-out of the computation. The system can be reprogrammed to run a different algorithm by simply selecting a different set of DNA strands.

“We were surprised by the versatility of programmes we were able to design,” said Prof Woods, who carried out some of his research while at Inria, the French national institute for computer science.

He is from Co Monaghan, completed in PhD in Maynooth in 2005, and recently joined the academic staff in his alma mater. The breakthrough took inspiration from the pioneering work of Alan Turing in computing during the last century, he said.

Although DNA computers have potential to perform more complex computations than those featured in Nature, Prof Erik Winfree of Caltech – in whose lab most of the work was done – cautioned that one should not expect them to start replacing standard silicon microchip computers.

Nor would Prof Woods be drawn on potential applications in obvious areas such as medicine and biotechnology.

“That is not the point of our work. We are showing what can be done and it will be up to others to apply it to the real world. No one would have foreseen the iPhone back in Turing’s day, for example. We are proving what can be done at a molecular level, which opens up a whole world of possibilities.”

Research funding was provided by the National Science Foundation and Nasa.

WHAT IS A MOLECULAR COMPUTER?

The creation of “self-assembly molecular computers” is frontier science that uses molecular hardware in the form of artificial DNA, which sticks together to execute a computation. The research involves developing algorithms to perform programmable functions (similar to a standard computer) and create tiny objects – all at the nanoscale.