Bacon news: Pigs may not be able to fly but they can smile, say scientists

Listening to pigs ‘like hearing children in a playground’ 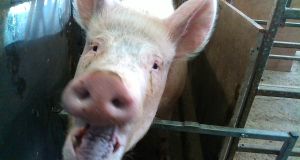 ‘If the pigs are barking like dogs they are happy’. Scientists have developed facial recognition technology to assess pigs’ emotional states

Scientists have developed facial recognition technology to assess pigs’ emotional states based on facial look with a project to help improve animal wellbeing.

The researchers say they are able to tell from a pig’s expression if it is content or distressed. They are developing a tool to monitor individual faces and alert farmers via their mobile phone to any health and welfare problems – often, distress on their faces is apparent before medical symptoms are evident due to illness.

Pigs are known as highly expressive and vocal animals. Previous research from Scotland’s Rural College (SRUC) in Midlothian showed they can signal their intentions to other pigs using different facial expressions and make different expressions when in pain or under stress.

In their latest project they capture 3D and 2D facial images of breeding sows under typical situations likely to result in different emotional states. They can experience lameness and show different facial expressions relating to pain before and after being given pain relief. Pigs appear calm and content when satiated, which is reflected in their expressions.

Images were processed at the University of the West of England Bristol’s Centre for Machine Vision, where machine learning techniques are being developed to automatically identify different emotions conveyed by particular facial expressions.

“By focusing on the pig’s face, we hope to deliver a truly animal-centric welfare assessment technique, where the animal can ‘tell’ us how it feels about its own individual experiences and environment. This allows insight into both short-term emotional reactions and long-term individual ‘moods’ of animals under our care,” she added.

After validating the techniques, the team will develop the technology for use on farms where individual sows in large herds will be monitored continuously.

A vet who specialises in the Irish pig sector, Pat Kirwan, who is based in Clondalkin, Co Dublin, confirmed the benefits of analysing facial expression in pigs. While there was a difference between “what I feel and what they feel”, facial expression (grimacing or a form of smiling); vocalisation, whether pigs were lying down or rooting, “are all useful indicators of welfare”, he explained.

None was a deal breaker in his view, but a good pig farmer would take all these things into account and the SRUC breakthrough could become another useful tool in the assessment of welfare, he said.

On vocalisation, he said it was like listening to children in a playground; the sounds of joy and crying can be distinguished quickly. He often goes into a pig farm and knows immediately “if the pigs are barking like dogs they are happy in their environment; if they are silent, there is something wrong”.

Some pig farmers already deploy speakers to monitor for coughing in pig herds, he said.

“Our work has already demonstrated a 97 per cent accuracy at facial recognition in pigs. Our next step will be, for the first time, to explore the potential for using machine vision to automatically recognise facial expressions that are linked with core emotion states.”