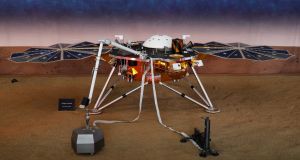 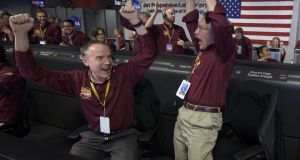 A Nasa probe that will study the interior of Mars landed successfully Monday, the agency’s latest effort to learn more about a planet to which it hopes to send humans someday.

The Mars InSight faced a harrowing 6.5 minute plunge through the planet’s thin atmosphere at supersonic speeds before touching down. Since its launch on May 5th, the Mars InSight voyaged more than 301 million miles before it began its final approach.

During the entry, descent and landing phase, the probe was tracked for the first time with a pair of small satellites the size of briefcases designed to send signals back to Earth more quickly.

Nasa said the cube-satellite “technology demonstration” worked as planned. Nasa reported that the lander sent a “safe” signal about eight minutes after touching down, confirming that the probe’s systems were operating normally.

InSight also sent its first picture, though the probe left the lens cap on. The landing is Nasa’s first attempt to explore the red planet since August 2012, when the massive, 2,000-pound Curiosity rover used a unique “sky crane” to touch down successfully on the surface. InSight was sent on its live-or-die approach so it could reach a flat “parking lot” at the Mars equator, NASA said.

Still flying at supersonic speed, the probe popped a 39-foot parachute to radically slow its velocity, followed by the jettisoning of the heat shield, the release of landing legs and the initiation of ground radar signals to acquire data on the landing site.

The craft eventually touched down on the Elysium Planitia. Starting in January, the InSight will seek to answer critical questions about rocky planet formation in the early days of the solar system.

The InSight mission will bring several martian “firsts” to interplanetary science, including the first seismometer situated on the surface, to detect and analyze waves created by “marsquakes.”

The stationary lander also carries a six-foot robotic arm and a self-hammering “nail” instrument that will burrow itself 16 feet into the ground to study heat transfer. While NASA’s twin Viking landers from the summer of 1976 had seismometers to detect marsquakes, those sat atop the craft and produced “noisy data,” according to JPL.

The InSight’s instrument will be on the ground and is expected to yield much deeper insight on quakes, which are thought to be smaller than 6.0 on the Richter scale.

Seismic activity on Mars is thought to come from cracks forming in the crust, with the planet’s interior energy thought to be less intense than Earth’s.

The 800-pound, solar-powered InSight is also the first deep-space vehicle to launch from the US West Coast.

Before the landing, Nasa was quick to note the paltry success rate – only 40 per cent for Mars missions; the US is so far the only nation that has successfully landed there. “We’re batting about 50 per cent or less,” Thomas Zurbuchen, a Nasa associate administrator, said Wednesday during a JPL news conference. In October 2016, the European Space Agency lost its ExoMars Schiaparelli craft during an attempted Mars landing.

An inquiry completed last year concluded that onboard computer software errors led to data conflicts, causing the probe to strike Mars at high speed. Nasa last lost a craft during entry in December 2009 when the 600-pound

Mars Polar Lander careened into the surface at about 50 mph, also due to a software error, because the lander’s descent engines shut down too soon. The InSight mission cost about $814 million (€718 million), including the launch costs; France and Germany invested about $180 million (€159 million). – Bloomberg