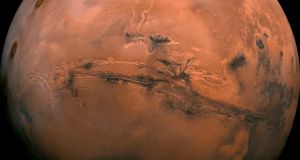 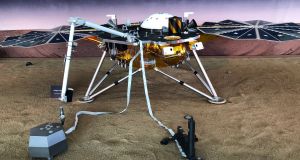 The success of all space missions to Mars hinge on safely negotiating what is called “the descent into terror”, and it lasts for a long seven minutes when communications with the probe is temporarily lost.

The silence on Monday gave way to cheers as engineers at the Jet Propulsion Laboratory campus in Pasadena, California, announced it had declared itself to be “home”. It came with a linked tweet: “I feel you, #Mars – and soon I’ll know your heart. With this safe landing, I’m here. I’m home.”

Earlier, one Nasa expert just described the complexities of landing InSight as like firing a basketball from Los Angeles and hitting “nothing but net” at the Empire State building in New York City. The success rate in relation to Mars has been just 40 per cent. The worst nightmare would be if InSight landed on a rock having successfully negotiated its descent. There’s nothing the space agency could do about that, she added.

The probe landed on a flat plain just north of the planet’s equator called Elysium Planitia. Images from the surface will be conveyed over coming hours.

The probe is carrying a suite of instruments – many of them from Europe – to try to determine the rocky world’s internal structure for the first time.

InSight had to survive during the period it takes for a probe entering Mars’ thin atmosphere at hypersonic speed to slow to walking pace and gently put itself on the ground, explained Prof Peter T Gallagher of Dublin Institute of Advanced Studies. It’s a switch from 12,000 mph to 5 mph for “soft touchdown”.

It used the exact same combination of heatshield, parachute and retro-rockets that proved so successful in positioning Nasa’s Phoenix probe in Mars “Arctic” in 2007.The most recent attempt to land on Mars was made two years ago by a European probe, which crashed on the planet’s surface.

It is hoped that InSight – which stands for Interior Exploration using Seismic Investigations, Geodesy and Heat Transport – will help scientists understand the early evolution of Mars and other planets in the solar system, including the Earth, using instruments to probe deep beneath the planet’s surface to measure temperatures and seismic activity.

It “is packed with piles of very sensitive equipment and solar panels”, he added. There is a lot of iron on the planet, Prof Gallagher added, but it’s not known if its core is solid or made up of liquid metal. - Additional reporting: Guardian