In ‘unprecedented move’, crew dug ramp to save group of birds trapped in ravine

A BBC camera crew, working on David Attenborough's Dynasties series, take the "very rare" decision to intervene and rescue a group of penguins that had become trapped in a ravine. Video: BBC 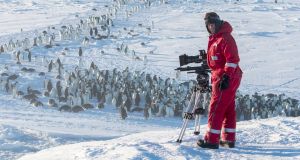 Leading wildlife camera operators and film-makers have defended the film crew on David Attenborough’s latest BBC series over their decision to break with convention and intervene to save a group of penguins that had become trapped in a ravine.

Nature film-makers are discouraged from intervening in the events they are attempting to capture on film. While the general principle is to avoid interfering with the natural course of events, the crew on the Dynasties series stepped in when they saw the birds’ predicament.

The penguins at the centre of Sunday’s episode of Dynasties had either blown or tumbled into a gully in a storm and were unable to to get out. In what BBC Earth described as an “unprecedented move”, the crew dug a shallow ramp so some of the penguins would be able to use it to save themselves.

Veteran wildlife cameraman Doug Allan, whose work has been lauded by Attenborough, described the convention of not interfering as a “cardinal rule”. He said: “If [for example] you’re watching a predator and prey relationship, the key thing is your presence must not influence the outcome.”

But Allan said he saw no problem with the film crew’s intervention. “Interfering or not is a decision based on what you’re seeing at the time. To interfere on a predation event is definitely wrong but, in this situation, they didn’t spook the penguins. All they did was create an escape route for them,” he said. Allan explained it would have been a far more stressful situation for the penguins had the film crew decided to pick them up and move them.

He added: “I certainly think, in that case, what they did was entirely justifiable and entirely understandable. I would have done the same thing in their situation.”

Philip Hoare, author and film-maker, said the crew were bound to upset someone whichever way they responded. He said he found himself in a similar position when he was in Sri Lanka filming sperm whales. When a group of killer whales appeared to hunt the sperm whales, he realised his boat was in between the predator and prey. “It was a very difficult thing to make a decision on,” he said, “I didn’t want to see any whales die, but there was a possibility that, by being there, we were frustrating one species’ natural instinct and need.” In that instance, his crew moved the boat.

Mike Gunton, the executive producer of the series, also defended the crew’s decision to help the penguins. He told Radio 4’s Today programme: “In the 30 years I’ve been doing this, it’s one of the very few occasions when we’ve ever done anything like this because it’s a very unusual situation. Normally, you don’t interfere, you can’t interfere, or you wouldn’t interfere because of all sorts of consequences.

“One, it would be very dangerous to do often for both you and the animal. Also, you’ll probably be changing the dynamics of the natural system or you might be depriving something of its food. But, in this particular situation, none of those things applied.”

While it has previously been reported that Attenborough had opposed the move, saying that “tragedy is a part of life”, Gunton said that the presenter had told him he also would have rescued the penguins.–Guardian