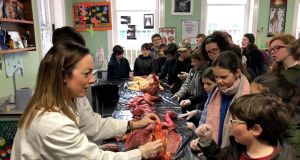 Biology teacher Sinead Reilly from O’Connell School in Dublin playing ‘guess the organ’ during a ‘blood and guts’ demonstration with pupils from Dublin 7 Educate Together National School in Grangegorman. as part of Schools Science Day. Photograph: Kevin O’Sullivan

The Dumbledore method of turning water to wine, blood and guts in the form of a pig’s organs clearly impressed the young audience at Schools Science Day in Dublin.

Those providing the science demonstrations throughout Friday were the teachers and 100 assisting pupils from O’Connell Secondary School in Dublin’s inner city.

The observers were more than 300 pupils from seven local primary schools who took up the invitation to attend the day, held to mark Science Week.

The aim of the event was to make science attractive to primary school children – enthral written on faces and gasps of excitement coinciding with each successful experiment suggested mission accomplished.

Science teacher Mary Timmons, co-ordinator of their first science day, stressed it had a serious purpose too; to promote science, technology, engineering and maths (STEM) subjects.

“It’s a crazy day. We thought we’d do something different. Science is suffering in this area. We decided to do something about that. The kids love it,” she added.

Deputy principal Sarah Mercier echoed the benefits of STEM. O’Connell School is in one of the most disadvantaged areas in the country, but through promoting science “an incredible number” of its students go on to study STEM at third level.

Meanwhile, excitement could be heard throughout the school. In one lab, biology teacher Sinead Reilly was playing “guess the organ” with pupils from Dublin 7 Education Together National School in Grangegorman. The blood and guts were real parts from a pig laid out before them.

Howls of horror greeted the head but all were impressed when lungs expanded with the help of air dispatched through a rubber tube. “Are we allowed touch?” asked one pupil wearing plastic gloves.

Upstairs, pupils from Central Model School on Marlborough Street were introduced to a young reticulated python which liked using its forked tongue to tickle noses, while chemistry teacher Leanne Ryan was assuming wizard status next door and showing the science behind Dumbledore’s famous dinner party where guests including Harry Porter kept changing their minds on what they wanted.

Elsewhere, physics teacher Senan Bonfield was giving a powerful show of strength, as a tin can dramatically collapsed before an amazed audience when internal air was removed from the vessel.

Among “guest lecturers” were Gerry Creighton of Dublin Zoo, well known from the TV programme The Zoo, and astrophysicist Prof Peter T Gallagher, a former NASA scientist, who was back in his alma mater for the first time since 1990. Another past pupil, Lord Mayor of Dublin Nial Ring, also dropped in to sample the fare.

Prof Gallagher said he was “quite an average student” as heavy metal was then his prime interest but, critically, his maths teacher Dr Tony Murphy, had helped him secure an honour in maths, even providing extra tuition for students on a Saturday morning.

He had just come from lecturing 4th-year students on planetary science in TCD but admitted he was a lot more nervous having to face a room full of curious and keen potential scientists.