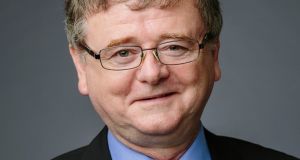 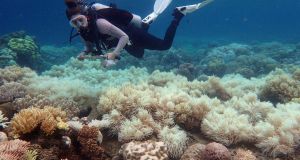 A diver examines bleaching on a coral reef off Orpheus Island in the Great Barrier Reef. Photograph: AFP/ARC Centre of Excellence for Coral Reef Studies/Greg Torda

An Irish scientist based in Australia who has battled public attempts to discredit his work on the devastating effects of climate change on coral reefs has won the prestigious John Maddox Prize.

Prof Terry Hughes was jointly awarded the prize for bringing public attention to coral bleaching. It comes weeks after his research centre controversially lost government funding for its work.

Known as the “standing up for science prize”, the award acknowledges scientists who promote their research as a matter of public interest and do so in the face of attempts to criticise their work.

Prof Hughes is originally from Dublin and studied zoology at Trinity College before going on to become an internationally renowned coral-reef scientist based at the ARC Centre of Excellence for Coral Reef Studies attached to James Cook University in Australia.

Last month in an Australian Senate estimates hearing, the Australian Research Council revealed the centre had failed to secure new funding and had been unsuccessful in even making its funding shortlist.

Prof Hughes declined to comment on the funding decision but said he was grateful to receive an award “that goes beyond the normal nerdy science medals”.

“It’s about science with a public conscience,” he said. “Clearly the plight of coral reefs through the threat of climate change is resonating with people.

“Australians had become motivated by science that showed the effects of climate change on the Great Barrier Reef. It’s certainly not too late to save the Barrier Reef, but we’ve got a narrow window of opportunity,” he added.

After his win, he tweeted: “Scientists are people too. Watching coral reefs dwindle worldwide is emotionally draining – deep sorrow, frustration at the complacency, lies and inaction . . . and a touch of rage.”

Maddox Prize judges noted Prof Hughes had been “tireless and courageous” in his efforts to communicate the research evidence on coral bleaching and tackle the misrepresentation of coral reef and climate science.

The other winner was naturopathy whistleblower Britt Hermes, a former naturopath turned researcher who is based in Germany. The judges singled out her advocacy and writing on evidence-based medicine despite personal harassment and threat of lawsuits.

The prize is a joint initiative of the charity Sense about Science and the scientific journal Nature. – Additional reporting: Guardian Services