How can farmers produce more food without more pollution? 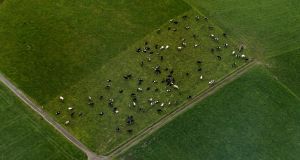 Irish farming is in a climate spotlight as never before. In the three years since the lifting of the EU milk quota the dairy herd has grown by 400,000 animals. Photograph: David Sleator

There’s been a bake-off in the UCD agriculture building and the remains are spread on a staffroom table. The biggest specimen among the agri-themed cakes is a chocolate Rice Krispies cake with dyed green desiccated coconut on top for the grass. It’s soil in cake form, which seems a good post-interview snack to have with soil scientist Dr Paul Murphy.

Next month UCD will host a conference to mark World Soil Day. The Cinderella science might pique more interest after a year of extreme weather when Ireland turned brown and, as Dr Murphy puts it, we looked out our windows and saw Australia.

Was he shocked by that transformation? “I guess so because it’s not entirely unprecedented but it certainly was an extreme event.” At the height of the summer drought farmers experienced a crop failure. The perennial ryegrass grown on over 90 per cent of the 4.4 million hectares of Irish farmland, stopped growing. And a fodder crisis was declared.

Irish farming is in a climate spotlight as never before. In the three years since the lifting of the EU milk quota the dairy herd has grown by 400,000 animals. The sector is aiming for production of 10 billion litres of milk a year. Greenhouse gas emissions from Irish agriculture are rising. Irish beef and dairy farming produces the most carbon emissions per euro of food output in the European Union.

Farmers will import up to 85,000 tonnes of animal fodder this year, according to Department of Agriculture figures. Nearly 20,000 additional hectares of crops to feed animals were sown. In some fields at the height of the grass season there was the peculiar sight of cattle “grazing” in lines at the height of the growing season when actually they were eating beef nuts spread across fields.

Farmers and environmentalists are lining up on opposite sides but there are strips of pasture on a farm in Kildare that might provide a middle ground. Dr Murphy and UCD colleagues have been trialling different grasses on the UCD Lyons Research Farm outside Newcastle, Co Kildare, to see if the system can wean itself off the high nitrogen diet that is such a central plank of intensive dairy farming.

Nitrogen fertiliser is made from the fossil fuel that is natural gas. The nitrous oxide given off when it’s spread on the land represents a third of Ireland’s agricultural greenhouse gas emissions and nitrogen and phosphorus fertilisers are polluting inland waterways and the sea.

Inland waters are more polluted by phosphorus, he explains. Plant and algae in seawater respond to nitrogen. “The issue for example in Courtmacsherry where you have all that sea lettuce growing. You’ll see it at low tide – there’s vast expanses of green. That’s probably more related to the nitrogen.”

Scientists like Dr Murphy and others have been advising farmers for years on the best management of artificial fertilisers to maximise grass growth without polluting rivers, lakes and estuaries. “Much research and advisory has gone into trying to optimise that system,” Dr Murphy says. “But it does strike me that the system is optimised for normal conditions. If you’re at the edge where you’re growing as much grass as you can and you’re making as good use of it as you can, supporting as many animals and producing as much milk out of it as you can that’s seen as the optimum. But it does mean that when a shock comes along and you don’t get the grass you have very little wriggle room and then you’re in crisis.”

Should farmers seriously consider a move to organic production on a much bigger scale, currently at under 2 per cent of agricultural production? “There could be reasons to argue that an organic soil might be more resilient but I wouldn’t overstate that,” Dr Murphy says. A faster solution might be to change the grass.

“Most of the grass seed sown in Ireland for improved pastures, which is the kind of grassland you have on the more highly stocked dairy farms, is ryegrass monoculture. It requires a lot of nitrogen. It responds very well to that nitrogen but it requires a lot. We’re interested in looking at more diverse grass swards where you sow in different grass species and also different herbs and legumes like clover, plantain and different types of grasses.” A more diverse mix leads to more complex rooting structure. With more complex and deeper root systems you might get better water retention and that would make the soil less vulnerable to drought.”

Since 2013 strips of grass have been grown on the UCD Lyons Research Farm in a study led by Dr Helen Sheridan. A photograph of the experiment shows how Irish fields could look. Instead of a single carpet of green some of the rectangles have white clover flowers, a variety of different greens hues, a wilder look to them. The study concluded the more diverse swards had “significant potential” to reduce the amount of nitrogen fertiliser needed.

The experiment has been scaled up to paddock-sized pastures which will be grazed by animals. Three pastures will be set up: one with high nitrogen fertiliser on perennial ryegrass, a second with a mix of ryegrass and clover and less nitrogen used, and the third a mix of six to 10 species with lower nitrogen. There may possibly be a fourth pasture with up to 25 species of grass, herbs and legumes.

Resilience is becoming the key word. “The climate models would predict that in particular in the south of Ireland we’re likely to have hotter, drier summers and that’s where those well-drained soils are that are more drought-prone,” Dr Murphy explains. “And it’s also where our more intensive agriculture is and that just further underlines why we perhaps should be giving more attention to the resilience of our systems and our farms to deal not with the normal year but the year when we have this.

“It’s amazing how quickly farmers have increased production. That is firing ahead all cylinders going. Obviously we have our water quality requirements and we have our greenhouse gas emissions. And we should be concerned about those. Recently the Dutch had to cull their dairy herd under pressure from Europe and their own government.

“There was a national decision that [they] weren’t going to meet their water quality targets at this level of production. A lot of money has gone in and I really hope we’re not in something like the housing bubble where there’s problem of group think: where you had banks, property developers, the Central Bank and the Department of Finance all telling each other that it’s all okay when it wasn’t all okay.”

Is Dr Murphy as a soil scientist putting up his hand and saying “it’s not okay”? “I would be cautious by nature as a scientist and I’m not an economist,” he says. “I would just be concerned that there are very challenging commitments that need to be met on greenhouse gases and water quality and there is significant expansion going on. Unless we improve the way that we do things there has to be serious concern about meeting those requirements.

“Ultimately it’s actually all self interest. The maintenance of soil fertility is fundamental to any country or people. It think it was Roosevelt who said that a nation that destroys its soils destroys itself.”