Grim times: Don’t expect science to save the planet 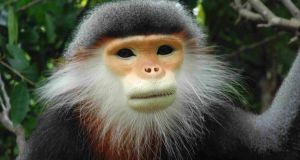 Since 1970, there has been an average decline of 60 per cent in populations of birds, mammals, fish and amphibians. In people terms, that’s equivalent to the populations of Africa, Europe, China, Oceania and both the Americas Photograph: Tilo Nadler/Conservation International/PA Wire

It has been a depressing month to be a human, and I’m not just talking about the political eutrophication to the east and west of our shores. The World Wildlife Fund for Nature (WWF) published its biennial Living Planet Report. Cynics among us might rename it the Dying Planet Report, such is the grimness of its findings.

Or are the cynics actually realists? After all, the report does have a chapter titled “Aiming higher: What future do we want?”, as if a future in which the collapse of ecosystems doesn’t widen the poverty trap, amplify societal polarisation or give an extra couple of shoves to the already unstable world order is something we have to choose.

Breaking news: it is.

For the beauty, diversity and complexity of nature (which, despite all our ugliness and idiocy, still includes us) to survive, let alone thrive, we have to swim upstream against the prevailing political and economic current, and actively, purposefully, choose that path. And be prepared to sacrifice things we like while doing it.

It’d be nice to think that there was some kind of benign dictator giving us bearers of oversized frontal cortexes dominion over the fish of the sea, and over the fowl of the air, and over the cattle, and over all the earth, and over every creeping thing that creepeth upon the earth.

It really would. But science doesn’t care about the narratives we use to console ourselves into the light, and nor does nature.

Nature just does what it’s always done for the last four billion years: adapts to its environment, generation after generation, while science does its best to apply a kind of systematised wonder to its bogglingly complicated logic.

#Nature is our life support, but we have been taking it for granted. Clean water & air, medicines & food - just some of the things nature gives us. We NEED a Global Deal for Nature & People in 2020 to halt & reverse nature loss! #NewDealForNature https://t.co/fQtiPxfl2k

Meanwhile, a generation of humans is busy exercising its right to dominion over that environment just like our parents did, except this time we’re doing it with our heads in microplastic-ridden sand, thinking up all sorts of absurdly creative reasons why long term pain for our kids and grandkids and their kids is better than short term pain for us.

It’s time get a grip. To paraphrase the UN’s biodiversity chief Cristiana Pasca Palmer, we humans are in the running to be the first species to document its own extinction. What an accolade! But it gets worse.

To paraphrase many others (including Barack Obama), we are the first generation to understand the scale of the problem and the last to have the capacity to actually do anything about it.

I’m not a massive fan of numbers in helping readers to take ownership of an issue, but this one is worth it: since 1970, there has been an average decline of 60 per cent in populations of birds, mammals, fish and amphibians. In people terms, that’s equivalent to the populations of Africa, Europe, China, Oceania and both the Americas. Let that sink in.

I was in the audience at Kilkenomics recently when David McWilliams interviewed Professor Jeff Sachs, renowned economist and sustainable development sage. Prof Sachs reminded us just how easily distracted we are, and that we’re only really good at focussing on a few things at a time.

With populist wastewater flowing full force through the turbulent channels of global media, it’s understandable that we wait on the shore with bated breath for the next red tide (in the toxic algal bloom sense of the term). I know I do.

We don’t have to be the generation that lets the powerful use denial, conspiracy and distraction to submerge and pollute the rest of us into indifference

But what we need, he says, is to use our limited attention spans to our advantage, and focus on climate change, biodiversity loss and getting poor children into school. So far, so noble.

But it’s not about virtue signalling, millennial snowflakery, environmentalism as a lifestyle choice or political identity, as too many people like to assume.

It’s about listening to the most knowledgeable in society, and hearing them, accepting the consequences of what they say, and making it socially unacceptable, politically intolerable and economically inviable not to act. Yes, all of us. Sustainable development is not sustainable unless it’s mainstream.

So while torrents rage on a flood of resurgent nationalism, the spotlight of history is on you, me and the rest of the macroinvertebrates at the bottom of the foodchain, clinging to rocks.

We don’t have to be the generation that lets the powerful use denial, conspiracy and distraction to submerge and pollute the rest of us into indifference. Let’s not be.