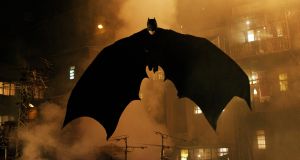 Batman Begins: Researchers are closing in on technology deployed to power the flying cape in the film Batman Begins.

Researchers at NUI Galway have created a mathematical formula that brings the flying wings used by graphic novel character Batman a step closer to reality.

And while we will not be flying about on a black cape any time soon, the formula also works for those seeking to develop artificial muscles, soft robotics, energy harvesters and “smart clothes”.

These fabric-like materials get thinner and stretch when a voltage is applied to them and then return to normal when the voltage is gone.

This was the very technology being used to power the flying cape in the film Batman Begins, but in reality the technology has not reached this level yet.

“We realised there was a big problem about soft dielectrics. To deform them you need a voltage and when you apply it they expand and thin out, but if it goes too far the electrodes touch, it short circuits and breaks the membrane,” he said.

He and NUI Galway colleague Dr Giuseppe Zurlo along with collaborators at Politecnico di Bari in Italy decided to tackle the problem. They developed models to study the membranes – some of them no more than a millimetre thick – and produced a formula to calculate when a membrane gets too thin.

“The mathematics gives them a threshold, an upper bound for the connection between the maximum stretch and the maximum voltage that can be applied before it short circuits,” said Prof Destrade.

There is huge interest in these membranes because of the applications they offer such as energy harvesting. If you put a membrane under the heel of a shoe then electricity can be collected just by walking.

It is possible to build electronics into “smart clothing” able to monitor heart rate or perspiration levels, information that can then be relayed by wireless technology powered by the clothes.

Researchers are also using dielectric membranes to build artificial muscles that can assist a person’s movement and soft robotics.

The formula now makes it much easier for experimenters to set limits for their membranes. “Already people are requesting information about it in places like Harvard and MIT,” he said.

There is also interest in China and Prof Destrade and Dr Zurlo are already working with engineers at Xi’an Jiaotong University there.