How heading a football over time can lead to brain damage 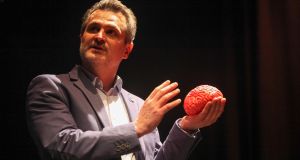 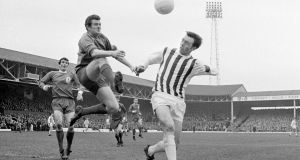 West Bromwich Albion centre-forward Jeff Astle challenging for a high ball with Liverpool goalkeeper Tommy Lawrence in 1968. The brains of former footballers should be donated for research to allow studies into the health effects of heading the ball, the daughter of Mr Astle said. Photograph: PA Wire

A blow to the head can cause different types of brain injury, including a localised focal injury or a more general diffuse brain injury.

A focal injury can rupture blood vessels and cause bruising but sports-related damage is usually more general and causes concussion, loss of consciousness and impairment of neural function.

Most of this damage arises due to the brain moving inside the skull, either accelerating or decelerating quickly, something that sets up wave movements in brain tissue which is as soft as jelly.

“The human body was not evolved to cope with this,” said Prof Michel Destrade, chair of applied maths at NUI Galway.

“We are not equipped for that. When you have acceleration the brain moves in the skull and you can have stretches, axons [message-carrying brain tissues] are damaged and that can build up,” he said.

He conducted brain research into when damage is likely to have occurred after a blow to the head.

“The research was to find out the thresholds that would lead to damage. We deformed brains at different amounts of stretch and speed and then measured the damage,” he said.

He and colleagues found damage would occur after axons were stretched 10 per cent, or from 1 millimetre to 1.1 millimetres.

“Another threshold is the speed at which it happens. If you stretch it at more than 10 per cent per second then it will also lead to axonal damage,” he said.

“The evidence shows there is an accumulation of damage. ”

There are a number of documented cases where heading a football was linked to dementia later in life.

An inquest into the death of England footballer Jeff Astle 14 years ago ruled he died from brain trauma caused by heading heavy leather footballs.

Hilderaldo Bellini who led the Brazilian team that won the 1958 World Cup had the degenerative brain disease, chronic traumatic encephalopathy (CTE). In boxers, CTE is caused by repeated blows to the head.

All of the footballers involved in the University College London study had signs of chronic traumatic encephalopathy. Six had brain post-mortems and of these, four were confirmed to have the condition, and also Alzheimer’s disease.