Scientists may have proven the existence of a new continent

Zealandia is a step closer to being recognised as a distinct entity, researchers claim 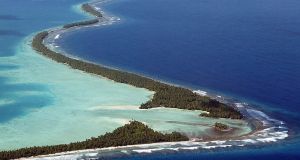 Zealandia is a step closer to being recognised as a continent, the authors of a new scientific paper claim. File photograph: Torsten Blackwood/AFP/Getty Images

Zealandia - a land mass submerged in the southwest Pacific - is a step closer to being recognised as a continent, the authors of a new scientific paper claim.

A paper published in GSA Today, the journal of the Geological Society of America, contends that the vast, continuous expanse of continental crust, which centres on New Zealand, is distinct enough to constitute a separate continent.

Despite the obvious question of how something so large could have been undiscovered for so long, the paper’s authors argue that even “the large and the obvious in natural science can be overlooked”.

Zealandia covers nearly 5 million sq km, of which 94 per cent is under water.

It encompasses not only New Zealand but also New Caledonia, Norfolk Island, the Lord Howe Island group and the Elizabeth and Middleton reefs.

The area, about the same size as the Indian subcontinent, is believed to have broken away from Gondwana - the immense land mass that once encompassed Australia - before sinking between 60 million and 85 million years ago.

“The identification of Zealandia as a geological continent, rather than a collection of continental islands, fragments, and slices, more correctly represents the geology of this part of Earth,” the paper states.

Researchers from the GNS Science research institute and Victoria University of Wellington in New Zealand, as well as the Service Géologique of New Caledonia and the University of Sydney’s school of geosciences, contend that Zealandia has the necessary geological elements to be considered a continent.

“It was not a sudden discovery but a gradual realisation,” they write in the paper.

“As recently as 10 years ago, we would not have had the accumulated data or confidence in interpretation to write this paper.”

Geologists have argued in favour of Zealandia being recognised as its own continent intermittently over the past 20 years.

The geophysicist Bruce Luyendyk was the first to apply the name Zealandia to a southwest Pacific continent in 1995.

Since then, the paper’s co-authors say, the term has had “moderate uptake” but was still not broadly known to international scientists.

Zealandia would be the world’s seventh and smallest continent, after Eurasia, Africa, North America, South America, Antarctica, and Australia. (Europe and Asia are sometimes recognised separately, despite being the same land mass.)

“It turns out New Zealand isn’t just a couple of small islands at the bottom of the world,” Fairfax Media New Zealand triumphantly reported.

Barry Kohn, a professor of earth sciences at the University of Melbourne, who had done work on Zealandia in the past, said there was a “fair consensus in the scientific community” in favour of its existence.

“It’s pretty clear that that whole area is not part of the ocean. It’s got all the hallmarks of a continent.”

He said rock dredged up from the area was clearly continental crust, “fairly continuous” and defined.

He said more data had been gathered over the past decades to confirm its existence.

“Like anything in science, the penny doesn’t always drop straightaway. You build up a body of evidence.

“It was all once part of a big continent that’s all broken up into little pieces of the puzzle.”