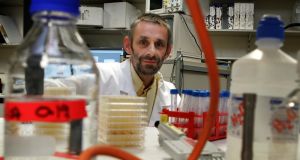 US president Donald Trump is risking lives by raising doubts over social media about the value and safety of vaccines. Vaccines are the greatest medical invention given their ability to save lives, a leading immunologist has said.

Trinity College Dublin’s Prof Kingston Mills will talk about the importance of vaccines during a free public lecture taking place at 6.30pm on Wednesday, February 15th.

He will also describe the “Trump effect”, issuing claims and causing unwarranted confusion and fear about vaccine safety over social media channels.

“President Trump has been tweeting about vaccines, making claims about links with autism,” Prof Mills said. “He has been adding further fuel to the fire that vaccines have side-effects that have not been proven.”

The use of vaccines goes back 200 years, long before doctors were able to understand why they worked.

“It is the greatest ever medical invention for preventing human diseases,” he said in advance of his talk. “They prevent a lot of diseases that kill people and if they don’t kill they cause damage. Now we have about 20 vaccines that prevent life-threatening diseases.”

Smallpox and polio are effectively gone because of international vaccination programmes, he said. Meningitis B and C cases are also on the way out.

There is also a powerful vaccine against the human papillomavirus which causes cervical cancer, but “that is where there is a big issue”, he said.

“The uptake [of the vaccine] in Ireland has gone down and is as low as 50 per cent. This means women are going to die of cervical cancer who would not have died if they had the vaccine.”

A campaign against the HPV vaccine started, with groups claiming it caused chronic fatigue syndrome in young people. “The link has not been proven but the negative publicity means the percentage of children getting the vaccine here is as low as 50 per cent,” Prof Mills said.

Too many people use social media and the internet to learn about vaccines but it is difficult to get unbiased information from these sites.

“I think what we have to do is get scientists and medics to try and warn the public and help them make an informed decision based on fact not hearsay,” he said. “You give people the full facts and try and persuade them.”