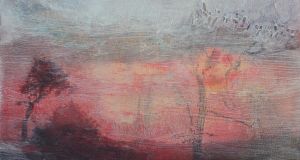 Underworld, a painting exploring the sun by Siobhan McDonald

In weeks prior to his death, JMW Turner is said to have declared to the artist John Ruskin, “the sun is God”. What he meant by this no one really knows, but what is in no doubt is Turner’s lifelong obsession with depicting the potency of the sun.

On February 10th at 4:30 am Irish time, Solar Orbiter – a joint European Space Agency (ESA) and Nasa mission – was launched from Cape Canaveral to journey to an unexplored part of our sun. On board is a range of cameras and sensors to observe the sun when it gets within range in two years’ time.

Researchers from Dublin Institute of Advanced Studies (Dias) were involved in the development of software for the satellite, while an Irish company – Enbio, based in Glasnevin, Co Dublin – developed the protective heat shield that will enable the Orbiter to study the sun at an unprecedented level of proximity.

Dias head of astrophysics Prof Peter Gallagher was delighted to be present to see ESA’s Solar Orbiter being launched. “Just incredible to think that it is now on its way to swing by Venus on its way to take pictures on the sun from inside the orbit of Mercury. These images will give us new views of the sun’s atmosphere and help us to understand how the sun works and how it impacts the Earth.”

For four years I have been developing a new project commissioned by Dias to mark the launch of the Orbiter into space. My work manifests itself in many forms including painting, drawing, film and sound to draw attention to contemporary topics dealing with air, breath and atmospheric phenomena. Ecology is at the heart of everything for me – recently I was selected for the 2020 Climate Whirl art programme to explore our troubled relationship with nature.

Some years ago at UCD Parity Studios Artists in Residence, I had an auspicious encounter with the eminent scientist and founder of Enbio John O’Donoghue. This led to my exploration of the sun and how a revolutionary use of carbon and charred bone was developed to cover the heatshield of the Solar Orbiter spacecraft. An opening occurred to explore Stone Age and Space Age materials; bringing ancient material and future technology together.

The charred bone material developed by Enbio that now protects the Orbiter spacecraft from the intense heat of the sun is similar to the material found in the burnt animal bone that Stone Age people used to make cave paintings.

There is a clear line transcribed by that material between the Orbiter back into prehistory which culminates in the body of my work called Crystalline. It is a series of more than 120 objects that relate to the dying glaciers that brings the elements of contemporary engineering together with prehistory in the use of carbon and charred bone.

The first phase of the work was endorsed by the UN Climate Action Programme in 2018, opening up possibilities for how scientific, historical and cultural narratives might be revitalised in artistic form.

Apollo’s Tom Jeffreys paid tribute to the work’s commemoration of the “vast diversity of the environment we inhabit” and the exploration of our equally diverse responses to it “with an aesthetic that is at once coherent, understated and quietly powerful”.

As Solar Orbiter reaches its vantage point above the planetary plane by the end of 2021, a new exhibition is being planned in association with Centre Culturel Irlandais in Paris as part of its series of exhibitions exploring the social and environmental challenges of our time to take place in Paris and in three other European cities.

Invited by Dias to start this next phase alongside Nasa, I am studying two historical processes of tracking and depicting the sun as they are reimagined by scientists in the context of global warming. Working alongside Prof Gallagher, I am exploring naturally occurring processes produced by the sun in new forms of solar photography.

A new series of quiet, resonant, small-scale paper pieces inspire larger works on unprimed canvas, built up of layers of paint. The series will include sculptures combining new nature-derived materials and 24-karat gold.

I am also developing a work called “Connected by Breath”, an installation about the importance of air and the co-existence between the lungs of the Earth, humans and plants. It explores air pollution as one of the many catastrophes of man’s impact on nature.

Turner’s determination to capture the sun’s potency is of great inspiration as I embark on my own exploration of how volcanic eruptions can completely change the light spectrum of sunsets. During a particularly powerful eruption, volcanoes shoot particles of ash into the atmosphere that cause sunsets to appear abnormally crimson for up to three years.

A residency is planned for Athens to study a rare archive consisting of hundreds of paintings of sunsets from 1500 onwards. The Great Masters reliably captured this effect by altering the red-to-green ratio in their sunsets after large eruptions. Christos Zerefos, from Greece’s Atmospheric Physics and Climatology Academy, spent two decades studying the paintings of Turner and others for signs of volcanic activity.

Inspired by Solar Orbiter’s journey to Venus, Mercury and into the inner solar system, I have been sifting through data vaults of solar activity to ask questions about the unexplored parts of our sun.

After looking through hundreds of computer files, made accessible via open access archives, I am making large-scale drawings and paintings to bring together ideas of some of the sun’s finest unseen moments. The work radiates hope while asking questions about the loss of nature.

Some of my favourite images of Turner’s sunsets are the more informal and acutely observed notations recorded on the back of his sketchbooks. A single brush stroke captures the transient changes in the spectrum by the effects of the sun. Whether the brilliance of the light of dawn, the liminality of midday or the potency of the sun setting, he has taken an extraordinary subject and given it a sense of timelessness and universality.

My future work will explore how Solar Orbiter can bring us closer to the core of the sun, to the awe we feel when faced by the mighty universe. By working with Nasa’s new technologies and contemplating on how Turner painted with the colours of the universe, many other stories have opened up to inspire this artistic exploration.

Siobhán McDonald is currently exhibiting at Bridge Projects in Los Angeles and the Deutsches Hygiene-Museum, Dresden. This year she will participate in a new project at BOZAR in Brussels. A solo show is scheduled for Taylor Galleries Dublin this July.