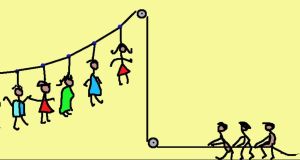 In his study of hanging, Haughton considered an account in the Odyssey in which Homer described how 12 faithless handmaids of Penelope were hanged.

Samuel Haughton was born in Co Carlow in 1821. He entered Trinity College Dublin aged just 16 and graduated in 1843. He was elected a fellow in 1844 and was appointed professor of geology in 1851. He took up the study of medicine and graduated as a doctor of medicine in 1862, aged 40.

In addition to his expertise in geology and medicine, Haughton was a highly talented applied mathematician. His mathematical investigations included the study of the motion of solid and fluid bodies; solar radiation; climatology; animal mechanics; and ocean tides. One of his more bizarre applications of mathematics was to demonstrate a humane method of execution by hanging, by lengthening the drop to ensure instant death.

Haughton’s investigation of hanging was published in the London, Edinburgh and Dublin Philosophical Magazine in 1866, under the title “On hanging, considered from a mechanical and physiological point of view”. He determined a humane method of execution in which the neck was broken by the drop, preventing the condemned prisoner from dying slowly and in agony.

Haughton included mechanical and medical calculations and argued that the long drop would have instantaneous effect. He ascertained that a drop energy equivalent to one ton falling through one foot would suffice. Thus, his first rule was: “Divide the weight of the patient in pounds into 2,240 and the quotient will give the length of the long drop in feet”. Thus, for a felon weighing 175 lb, a drop of 14 feet would be sufficient to ensure fracture of the spine and sudden death.

In his study of hanging, Haughton considered an account in the 22nd book of the Odyssey, in which Homer described how 12 faithless handmaids of Penelope “lay by night enfolded in the suitors’ arms”. Her son Telemachus, with the help of his comrades, hanged all 12 handmaids on a single rope.

The precise method is obscure; Haughton assumed that Telemachus fastened one end of a rope to the top of a pillar and tied 12 slip-knots which were placed around the necks of the women. The free end of the rope was then passed over another pillar, and “they all pulled together, in sailor fashion”, hoisting the women into the air, “That none, with quivering feet, might reach the floor . . . so they, suspended by the neck, expired/All in one line together”.

Haughton carried out a mechanical analysis of this arrangement, which formed what he called a funicular polygon (see picture). He found that the force required was equivalent to at least the weight of six women, making it quite impractical: it would not have been possible for the hangmen to lift all the women into the air together.

He concluded that another method must have been employed. Perhaps a hawser was passed in a circle around and under the dome, and the 12 women were hanged from nooses tied to it. They would have been lifted up one by one to swing clear of the ground.

Haughton’s formula for the drop-height was used for many decades in the performance of executions. Capital punishment in the Republic was abolished in 1964 for most offences – and completely in 1990.

Peter Lynch is emeritus professor at UCD’s School of Mathematics and Statistics – he blogs at thatsmaths.com