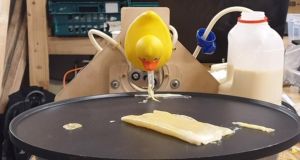 The ‘pancake printer’ developed at a previous Science Hack Day, which makes pancakes through the mouth of rubber duck. Photograph: David McKeown

Have you an idea of something to make, but to do it you would need a free weekend, a group of helpers, a few electrical sockets and a bit of food? If so, then Science Hack Day Dublin on March 7th and 8th could answer the call.

An almost annual event since 2012, the free, two-day “hackathon” encourages people to pitch ideas about things to make, or to join teams to make those pitches a reality.

“At its heart it is a social event,” says Science Hack Day Dublin founder Dr David McKeown. “The making and creativity is what brings everyone together to work on new projects and to have some fun. There’s no pressure to invent something ground-breaking, it is about working with people from different backgrounds in a relaxed environment.”

People have already started to submit ideas for the event this year, which will take place at the TOG Hackerspace in Dublin 8. Those ideas include a machine to make different kinds of bubbles, a plastic injection machine to help with plastic up-cycling, a low cost ventilator and a radiation detector.

Previous years saw the creation of a “pancake printer” that printed pancakes through the mouth of rubber duck, a “Twitter knitter” that produced tweets in woollen form, a laser tent and even a pair of drumming trousers that incorporated noise-making pads so that the wearer could play sounds when the mood took them.

Maker Mike Hibbett was on the trouser-building team, and has been a regular at Science Hack Day since 2014. “Making has been in my blood since childhood,” says the electronics engineer, who works for a company that makes connected devices and who has a lab with laser cutters and 3D-printers in his home.

“When I moved to Ireland, I discovered that Dublin has a tight-knit community of makers, and I am involved in various events, including Science Hack Day Dublin. What I really like about it is the inclusivity and friendliness, and there are even travel and childcare bursaries to help people get there who might not otherwise be able to.”

Hibbett was on the team that built the drumming trousers, and last year he and a fellow maker baked cupcakes that represented the periodic table of the elements. This year, he wants to revisit a radiation detector project to make it more sensitive. “There is a very low amount of radioactivity in a banana, so the goal is to detect that,” he explains.

McKeown encourages anyone over the age of 18 with an interest in making to sign up and attend Science Hack Day Dublin, which is supported by several sponsors and Science Foundation Ireland. “We offer free food and you can stay overnight if you wish,” he says. “You may even get to take away a prize of a wooden medal made for the occasion.”

For him, the hackathon offers a change of focus from his work as a lecturer and researcher at University College Dublin, where he works on engineering related to rocket launches and building EIRSAT-1, Ireland’s first satellite. McKeown will also feature in upcoming episodes of Big Life Fix on RTÉ television in coming weeks, applying his engineering skills to develop a rowing aid for a teenager who has one forearm, and a system to help a person with multiple sclerosis to paint for longer.

To sign up for Science Hack Day Dublin, see sciencehackdaydublin.com