How do you talk science to the layperson? ‘Be a bit goofy’ 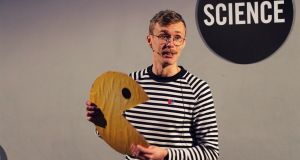 What do synaesthesia, split brains and designer babies have in common? On the face of it, perhaps not much. But they have all acted as stepping stones for a University College Dublin-based researcher to win a major competition about science communication.

When Hayden Wilkinson first heard about FameLab Ireland, a competition supported by the British Council and Science Foundation Ireland that encourages researchers to present about a topic to a general audience in just a few minutes, he figured he would give it a go.

“I am doing a master’s in science, majoring in medicine, and part of the requirement is to be involved with public engagement,” he says. “So taking part in the local university competition seemed to be a good way to do it.”

For the topic of his UCD talk, he chose synaesthesia, where a person has particular sensory responses to stimuli. “That might be seeing colours when you hear music, or tasting something when you hear a sound,” explains Wilkinson, whose friend has synaesthesia. “I thought it might be something interesting to present on, and it worked: I made it through to the Dublin final.”

For that next leg of the competition, Wilkinson decided to talk about split-brain syndrome, where the connection between the left and right hemispheres of the brain no longer supports communication between them.

“It was used as a treatment for epilepsy, where the hemispheres were disconnected, and you could see the hemispheres started to operate independently and disagree with each other,” says Wilkinson, who used a prop onstage to help get the point across. “We weren’t allowed to use slides in our talks, so I brought an apple and I split it in two, to help people visualise how the brain would effectively be split.”

It worked, and Wilkinson went through to the national FameLab final, held at Science Gallery Dublin in April. For that talk he focused on gene editing and “designer babies” – why that topic? “What I saw in the Dublin round was that a lot of the really good presentations hit home with moral implications, they had people questioning and thinking about the issues,” says Wilkinson. “So I decided to talk about the gene editing technology Crispr-Cas9 and where the technology had been used illegally on human babies, and the problems with that.”

Having won the Irish final of FameLab, Wilkinson will now represent Ireland at the FameLab International competition at Cheltenham Science Festival in early June. His current plan is to modify the talk on gene editing for the semi-finals, and if he gets through to the finals, he wants to talk about the science of the gut instinct.

Interestingly, Wilkinson’s research in science is not on any of the specific topics he has chosen to talk about for FameLab. He works at the National Institute for Bioprocessing Research and Training in the field of glycobiology, which looks at naturally occurring sugars and sugar-based compounds such as glycoproteins in the body.

“The rationale behind my work is to be able to look at the differences in glycoproteins that occur between health and disease,” Wilkinson says. “I am optimising methods to release glycans [types of sugar molecule] from glycoproteins so they can be analysed.”

His advice for other researchers seeking to communicate on stage to general audiences is to take an approach that helps them feel more comfortable as they move outside their comfort zone. “For me that is about being a bit goofy, a bit silly and trying to make people laugh,” he adds. “Focusing on that really helps to bring down the nervousness.”