Heavyweight in the field of gravity research 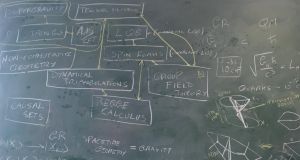 “When we formulate the ideas around quantum gravity, in the form of mathematical theories, we are aiming to say something fundamental about the world, and not just our experience of it.”

Originally from Sicily, Daniele Oriti has spent the past decade at the Albert Einstein Institute in Potsdam, Germany, working on quantum gravity, an idea which aims to put together the two giant theories of the past 100 years: Einstein’s general relativity and quantum mechanics.

Because quantum mechanics describes most of the world in terms of discrete quanta – a granular, rather than continuous, structure of things which therefore forbids infinities and singularities – then we should also be able to describe gravity in this way too.

Oriti also works on the philosophy of space-time physics. He believes in fundamental physics: once the underlying mathematics of a theory are well established, there is room for different interpretations and conceptual issues; essentially philosophical work.

When we have constructed a new theory rather than simply developed an existing one, he says, how one proceeds depends on our philosophical intuitions and prejudices, and requires a lot of creativity. This viewpoint may not sound like an exact science, but is precisely the kind of debacle in which theorists such as Einstein, Bohr and Dirac found themselves during the 20th century.

Oriti alludes to the notion that, at the edge of scientific knowledge, all we have is philosophy.

How did you end up in the field of physics? Tell us a little bit about your younger life.

I must tell you that when I was younger I had no particular talent whatsoever. When I think of myself as I was growing up, I like to quote the Italian writer Carmelo Bene, who said: “Of the genius, I always had the lack of any talent.” But I would go one step further myself, and add “and only that!”

I liked school and I was doing well in most subjects. I was a good learner and I enjoyed reading, but I was not especially good at anything. I wasn’t especially good at mathematics or physics either. I eventually became interested in these topics because of a fascination with philosophy, which I developed around the age of 15 or so. From there I realised that I would have to choose a direction in life which would provide a good way to tackle some of the most interesting philosophical questions.

So, for me, one choice was to go in the direction of a field like psychology, consciousness, or theories of the mind, and another was cosmology and theories around space and time. So based on where I was at that moment in my life, in Rome, it became clear that there was a very good university for studying physics. So, in that sense, circumstances essentially helped me choose the field.

What kind of family background do you have? Was this a factor in your decision to become a physicist?

My parents definitely like to read and they are quite cultural in many ways. I probably generated my own curiosities by watching them. But I’m actually not really from an academic or overly intellectual family tradition.

Sure, my parents both have third-level degrees, my mother has a master’s, but there is no historical legacy of physics or philosophy there. My mother is a primary school teacher, and my father, now retired, worked as a manager for a large, state-owned company. I think they were actually the first in their families to get a degree.

One of my grandfathers was a construction worker, the other worked in a number of working-class jobs; one grandmother died when my father was young, and the other worked making clothing and garments.

Sometimes I tell my parents about the work I’m doing, or send them some topical stuff related to it – maybe during the exciting moments, which are quite rare – and for sure, like most people, they cannot follow all the details. But they get the gist of it and they are definitely interested.

In what way does quantum gravity require us to rethink our notions of space and time?

With quantum gravity we are essentially undermining the basic structures that we are used to, so that we can understand the make-up of world at a deeper level. Space and time are the boxes which we usually use to think about everything, and because we become familiar with them as children, while we are growing up, it is very difficult to conceive of a cosmic structure that is not defined in these terms.

When we formulate the ideas around quantum gravity, in the form of mathematical theories, we are aiming to say something fundamental about the world, and not just our experience of it

Regarding time, as children we gradually become familiar with the notions of the “duration” or “continuum” of time. So to work on quantum gravity, I think we have to somehow unlearn lots of what we naturally absorb about space and time during our early years.

What is this idea of an “atom of space” which pops up regularly in your work?

So, in that sense, an atom of space is a constituent of space-time, a kind of entity – which we can describe mathematically but not visualise outside of the realm of mathematics – that makes up space itself.

We have to name these fundamental constituents of space in some way so that we can have a conversation, so the gravitational physics community adopted the terminology “atoms of space” somewhere along the way. These are nothing like atoms as we usually know them – but it is a good analogy.

We realised at a certain stage that the concepts we were working with, through the language of mathematics, looked a lot like the theory of condensed matter physics.

One theory is that, at the conception of the universe, the atoms of space condense to produce the Big Bang and everything which exists thereafter. This is part of an idea which we call group field theory condensate cosmology, where the mathematics we use suggests that the entire cosmos might be derived from these atoms of space.

You can think of the process in condensate cosmology as being analogous to steam (the atoms of space) condensing into water (space-time). According to the theory, once this transition takes place, for example at the beginning of the universe, then the familiar notions of space and time were born. Although, even speaking of a “transition” or “beginning” gives rise to the notion of time, which we must learn to forget.

What are the underlying assumptions which you must make in your theories?

When we formulate the ideas around quantum gravity, in the form of mathematical theories, we are aiming to say something fundamental about the world, and not just our experience of it. This is an underlying assumption. We must assume, when we are writing our equations, that they are describing something real out there, beyond their human conception, and beyond the mathematics itself.

So, only by assuming a universal quality of mathematics, and of our theories, can we really be serious and proceed towards a further description of what the world might be made of. This is our philosophy.

It also depends on the type of mathematics that we use. We should hope that this language we have developed to do science with enjoys some level of universality, and that other alien beings, if they are out there, may have developed it in a similar form.

Conor Purcell writes on science, nature and philosophy, and has a PhD in earth science. He is journalist in residence at the Max Planck Institute for Gravitational Physics in Germany – @ConorPPurcell