Star student from Dublin to have asteroid named after him 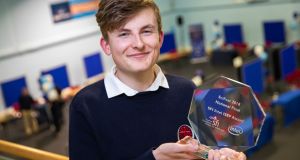 A 17-year-old student from Co Dublin will have an asteroid named in his honour after winning an international science and engineering award.

Adam Kelly, a student at Skerries Community College, was granted the distinction after his success at the Intel International Science and Engineering Fair (ISEF) in Phoenix, Arizona.

It is in recognition of his work in developing a series of digital tools for use in quantum computing, which is predicted to drive the supercomputers of the future.

Mr Kelly over the past year has won two of the top competitions for young scientists in Ireland. He secured his place at the Intel competition when he won the Science Foundation Ireland Intel ISEF award at SciFest National Final last November.

He went on to become BT Young Scientist & Technologist of the Year last January. Representing Ireland at ISEF 2019, he won the Dudley R Herschbach SIYSS Award, one of the main prizes at the event attended by some 1,800 students from more than 80 countries.

Mr Kelly’s work is a combination of physics, computing and maths. Unlike a traditional computer that uses bits represented either by one or zero, a quantum computer works off “qubits”, meaning an action can be a one, zero or both at the same time. This means a quantum computer can work at an unprecedented speed on vast calculations with applications in fields such as astronomy and climatology.

He developed “an open source solution” to simulating quantum computing up to 15 times faster than conventional simulations. His solution is freely available for use by anyone in their own experiments – the software has direct applications in the verification of quantum devices; quantum algorithm design and investigations of quantum supremacy.

He said: “I really enjoyed meeting young people from all over the world and seeing the different projects that they are working on. This was a wonderful opportunity to share ideas and to learn, and I am so thankful to my family, friends, teachers and everyone at SciFest who have supported me up to now.”

“We are all very proud of Adam . . . [he] has developed a truly innovative project and we are delighted that he has had the opportunity to bring it to an international audience.”

The SciFest programme is funded primarily by SFI, Boston Scientific, Intel Ireland and Specsavers. SFI director of science Dr Ruth Freeman congratulated Kelly on his achievement. “It is wonderful to see a young Irish innovator competing at a global level.”