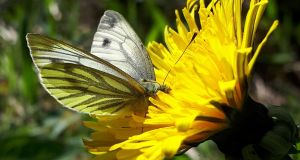 Most people walking alongside the restored pond on the Castletown estate in Co Kildare would barely notice the tiny purple wildflower beneath their feet, but for butterfly recorder Pat Bell it provides an important clue to what we might see next.

“It’s a cuckoo flower, also known as ladysmock or cardamine,” he says, bending down to examine it more closely. “The Orange Tip butterfly lays its eggs on the flowers. Butterflies are quite fussy. The Common Blue only lays its eggs on bird’s-foot trefoil.”

It’s early in the season, so there are no eggs yet. But a cloudless blue sky and a temperature of 17 degrees means it’s a good day to spot butterflies, and soon we see an Orange Tip fluttering over a stretch of meadow. It’s a butterfly that’s easy for a novice recorder to spot: it’s white with an orange tip. On a mud beach on the Liffey nearby, we see a small white butterfly, its delicate wings streaked with green – a Green -Veined White. It’s “puddling”, Bell explains, taking in minerals from the mud. Two Peacock butterflies rise up from a warm rock where these cold-blooded creatures have been taking in heat to kick-start their day.

This is the first of five monitoring walks that Bell will do on the Castletown estate this summer, as part of his contribution to the National Biodiversity Data Centre’s Butterfly Atlas Project. He also does a regular walk every week along the Royal Canal between April and September. Bell is one of several thousand citizen scientists helping the centre to monitor Ireland’s wildlife.

Butterflies aren’t just beautiful – they’re a significant food source for other animals, including birds, as well as important indicators of habitat loss, soil enrichment and climate change. Since 1990, warmth-loving butterflies have shifted northwards across Europe by 114km, and butterfly populations have declined by 30 per cent.

“Butterflies are what we call an umbrella group,” says Dr Tomás Murray of the National Biodiversity Data Centre. “They’re an immediate and sensitive indicator of land use change and climate change. They can tell us more about the changes in other insect groups that we can’t easily measure.”

While Ireland may receive more warmth-loving butterflies in future because of climate change (some migrant butterflies are already becoming residents), Murray warns that climate change will bring less welcome other insects. “The spread of the Asian hornet is being facilitated by climate change,” he says. “They’re the shark of the insect world, and they target honeybees. The fact that they’re now in Normandy and Guernsey means it’s only a matter of time.”

The risks posed by invasive species were highlighted earlier this month in a UN report, which also declared that up to a million species are at risk of extinction worldwide. It concluded that the very foundation of our economies – food security and health – is now at risk. The report also highlighted the two-way links between declining biodiversity and climate change, and the need for resilience.

“All species provide ecosystem services, and if you take something out, you’re taking out resilience,” says Dr Liam Lysaght, director of the biodiversity data centre. “In Kilkenny recently I found it hard to find a ringlet butterfly, even though all it needs is a bit of rough ground. I found it alarming that the ground is so sterile and so intensively farmed that there doesn’t seem to be space for a generalist butterfly. It’s really scary if you think about it.”

The centre also co-ordinates Ireland’s reporting on species and habitat to the EU and other international organisations, and provides evidence to support conservation management. It also implements the All-Ireland Pollinator Plan, which is working to reverse the decline in pollinator populations, particularly bees, which play a critical role in farming and food security. As well as education and outreach measure with schools and local authorities, the centre runs a programme that incentivises practical measures on farms in Kildare, such as managing hedgerows in a pollinator-friendly way.

“Our mantra is that we provide the evidence base for what’s happening,” says Lysaght. “The reason that programme is so successful is that there is research to show the benefits of integration on farmland.”

“The All-Ireland Pollinator Plan has been one of the great conservation successes in Ireland in recent years,” says Jane Stout, professor in botany at Trinity College. “They’re not just a data centre with a computer full of numbers. What they do is fundamental, but they’re doing it on a complete shoestring, with no job security.”

The centre, which has just six core staff, is operated by private company Compass Informatics via a service-level agreement with the Heritage Council, funded by the Department of Heritage. It did not receive its first tranche of funding for 2019 until a few weeks ago and no contract has yet been agreed for 2020 or beyond.

The Heritage Council says the core funding for the centre in 2019 would be the same as 2018, at just under half a million euro, and that a review of the centre’s structure is due to take place shortly. The department says it is committed to supporting the centre in future. Given that the Dáil has just declared a climate and biodiversity emergency, it might be expected that its role and funding would be expanded.

“It’s really proven its worth, and what they do is amazing,” says Pádraic Fogarty of the Irish Wildlife Trust. “ But the way they get their funding at the last minute is crazy.”

Back at Castletown, we’re joined on our walk by head gardener Rory Finnegan, who is managing 80 acres of the estate for wildlife, including avoiding the use of pesticides. He also has a Mason bee project, literally within the walls of Castletown House, contributing to the pollinator plan.

As we continue through the meadows, spotting a Speckled Wood butterfly and a Small Tortoiseshell, Bell and Finnegan discuss how butterflies and plants interact and how Finnegan can help make the estate even more butterfly-friendly in future. Peacocks and tortoiseshells love nettles, so he will make sure they’re left in situ. It’s an approach Liam Lysaght hopes other landowners will take in future.

“When push comes to shove, the bottom line takes over,” he says. “But we could achieve a hell of a lot by just giving wildlife a little bit of space on land used for farming. There needn’t be a conflict. Farmers could start by cutting their hedges only every three years.”

What I’ve learned on my butterfly walk is that the biodiversity dance is a delicate one; if something disappears, the whole system starts to suffer. The more species of wildflowers and plants we allow to thrive, the more butterflies, bees and other insects will survive, providing food for birds, fish and mammals including, ultimately, ourselves.

As we turn away from the river, a dart of electric blue announces a kingfisher in flight. Finnegan remarks that he saw an otter just the other day. A Green-Veined White flutters over a patch of weeds left to run wild. On this small stretch of riverbank, biodiversity isn’t just a mantra, a concept, or a cluster of data – it’s a revelation of what the world could look like, if we just gave it a chance.