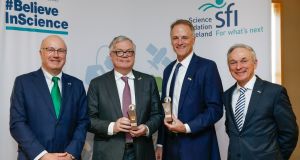 The combination of the Irish education system and investment in science has resulted in the generation of graduates who can easily compete at an international level, according to Prof Eamonn Quigley, a leading gastroenterologist, who has been awarded this year’s St Patrick’s Day Science Medal.

Now in its sixth year, the award recognises recipients for their contributions to research and industry and for their roles in supporting and engaging with the research ecosystem in Ireland. It is given to US-based scientists, engineers or technology leaders with strong Irish connections.

The 2019 medals were presented at an event in Massachusetts Institute of Technology, Boston, by Minister for Communications, Climate Action and Environment Richard Bruton.

He said he was very pleased to present the medals on behalf of the Government and Science Foundation Ireland (SFI). The recipients “demonstrated outstanding leadership in their respective fields and have made extremely positive societal impacts in the US and Ireland”, Mr Bruton said.

Prof Quigley, a native of west Cork and graduate of UCC, has worked on both sides of the Atlantic in a career spanning more than 30 years. Following clinical training in Glasgow, he spent two years as a research fellow at the Mayo Clinic in Minnesota.

He returned to Cork in 1998, where he served as dean of the Medical School at UCC for seven years and as a principal investigator at the APC Microbiome, an SFI research centre specialising on the impact of communities of microbes in the body on health. He took up his current post as chief of gastroenterology and hepatology at Houston Methodist Hospital in 2013.

Speaking to The Irish Times, Prof Quigley said that when he came back to Cork, he detected a palpable change in confidence among Irish graduates. They were already working at an international level even before they had left Ireland. It meant they were going to the US, for example, for specific objectives rather than to complete training.

Prof Quigley said he was amazed and honoured to have received the medal. “Working between Ireland and the US has given me a valuable international perspective that I have brought to my research, clinical practice and teaching. It is important that we recognise, and continue to nurture, the innovative and transformational research taking place between both countries, benefiting our collective societies.”

His current research is mainly focussed on irritable bowel syndrome; notably the possible link between the low-grade inflammation with the mircobiome – and on the latter’s role in liver disease.

Mr Mahoney has nearly 30 years’ experience working with medical device companies. Prior to joining Boston Scientific in 2011, he served as worldwide chairman of the medical device and diagnostics group at Johnson & Johnson.

US-born, he has family links to Cork and Mayo. Boston Scientific first came to Ireland in 1994 and is now one the country’s largest employers with 5,000 employees in Clonmel, Cork and Galway.

The company produces devices used to treat some 30 million patients annually, including treatments for disorders of the heart and circulatory systems, chronic pain, Parkinson’s disease, gastrointestinal and urological conditions.

Mr Mahoney said: “The SFI St Patrick’s Day Science Medal is a wonderful recognition of the important R&D programmes and our strong connection to Ireland at Boston Scientific.”

Their presence in Ireland had grown over time “thanks to the success of our hard-working Irish teams and a strong business ecosystem that is conducive to medtech and R&D”.

He added: “It is exciting to see the best and brightest minds from research institutions, clinical practice, manufacturing companies and government collaborating so that together we can address the most pressing healthcare needs.”