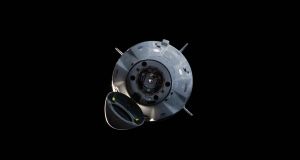 SpaceX’s new crew capsule has returned to Earth, ending its first test flight with an old-fashioned splashdown in the Atlantic Ocean.

The Dragon undocked from the International Space Station early on Friday. Six hours later, the capsule carrying a test dummy dropped into the Atlantic off the Florida coast.

A SpaceX rocket launched the 16ft-tall capsule from the Kennedy Space Center in Florida last Saturday.

It marks the first time in 50 years that a capsule designed for astronauts returned from space by plopping into the Atlantic.

Nasa is counting on Elon Musk’s SpaceX and Boeing to start launching astronauts this year.

1 Tyrone midwife on the cover of Vogue magazine
2 Pubs reopening will not mean ‘fellas having a few pints and peanuts’, Holohan warns
3 Donald Trump’s political success is based on racism
4 Donald Trump is in trouble, and that could spell very bad news
5 Ireland earns ‘right to be hopeful’ again as Government fast-tracks plans to reopen country
Real news has value SUBSCRIBE