International Women’s Day 2019: Lessons from a voyage to Antartica 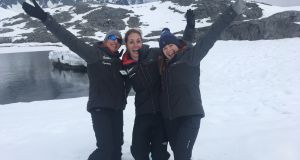 “You can’t be what you can’t see” is a phrase used to explain in part why women are underrepresented in the Stem disciplines (science, technology, engineers and maths). Without female role models women and girls are less likely to pursue a Stem career.

A study by Microsoft found that girls who know a woman in a Stem profession were 17 per cent more likely to feel empowered to engage in Stem activities than those who don’t know a woman in a Stem profession. Yet women have throughout history blazed trails into new disciplines, upsetting the apple cart and finding their way in previously all-male domains. Someone always has to be first.

In 2018, I was the first woman living in Ireland to be selected to participate in a global leadership programme for women in science called Homeward Bound. As part of the programme I spent three weeks on board a ship in Antarctica with 89 other female scientists. I met many women who had become what they could not see.

Tayyaba Zafar is one of the first women in Pakistan to study astronomy. Yi Luo is breaking convention to be a social scientist and social entrepreneur connecting young urban Chinese students to their heritage in rural China. She is in her mid-twenties and pursuing her dreams despite pressure to settle down and get married. From university professors to lion conservationists, electric mobility experts to geologists, most of the women I met were the “first” or the “only” woman in their role.

I found two women originally from Ireland in the Australian cohort on the ship: Dr Deirdre Collins from Dublin and Dr Charlotte Conn from Warrenpoint, Co Down. Deirdre is a geneticist and researches how Clostridium difficile infection spreads in hospitals and the community. Her decision to travel to Papua New Guinea as a young woman to study the spread of cholera was a first. PNG was not considered a safe place for single, young women and the lead scientists were all men.

But once on the ground she worked with three amazing local women technicians, one of whom has gone on to lead the lab (another first). Charlotte has a PhD in biophysical chemistry and is investigating the use of soft nanomaterials to improve the efficacy of protein and peptide based drugs, including those needed to manage global antibiotic resistance.

She had few female role models in Ireland or the UK where she studied, but then found “amazing female mentors” when she moved to Australia. She is now passing on what she has learned as chair of the Equity and Diversity committee for the Australian Colloid and Interface Society.

As Charlotte, Deirdre and I sailed along the western edge of the Antarctic Continent, one of the fastest warming places on the planet, past icebergs and melting glaciers, in the company of women scientists from a wide range of disciplines and geographies, we reviewed the facts. The world is in a leadership crisis with political upheaval, cultural division, undernutrition and inequality on the rise.

Climate change, biodiversity loss and air pollution threaten our health, our wellbeing and the very survival of humanity. Men hold most positions of power – only 11 women are serving as head of state and 10 as head of government around the world. Men run most of the world’s corporations – there were only 24 women leading Fortune 500 companies in 2018. Could an increase in women’s participation bring a change of leadership style and a fresh approach to addressing the world’s problems?

The 90 women on our ship are convinced that having more women in leadership positions in universities, companies, local councils and parliaments will help. Over 21 days on a small ship, living by our own agreed rules, there was no division, tension or conflict.

The principles that guided our interactions were kindness, integrity, empathy and fairness and they led to collaboration, discovery, inspiration and action. As a result, there is a growing network of women scientists ready to support each other, work together, share information, amplify each other’s work, write references and make recommendations: all things needed to get ahead in your career, whether you are an engineer or a surgeon.

Finding solutions to the world’s problems will require a new way of living on planet earth. How we move, communicate, eat and work will be different and ideally better than it is now. The future of transport is zero emissions, the future of food is healthier and fairer and the future of work will see us work smarter, giving people more time to invest in their families and communities.

Science will be at the forefront of these transformations and the best science will be led by diverse teams of women and men who collaborate and share their information across disciplines and with the wider ecosystem of actors in society.

As human beings we can be what we can’t see. We just have to imagine the future we want and then work hard to make it happen. This is same approach that the women scientists who were first followed: as they know, making a difference requires determination and bravery, vulnerability and humility.

My 11-year-old daughter says she wants to be president, not of Ireland, but of the world. A job that has not been invented yet, but who is to say it won’t exist in 2060 and imagine if the first person to hold this position was a woman who came to power by leading with integrity, kindness and fairness. That is a future I am ready to imagine.

Dr Tara Shine is director of Change by Degrees and co-founder of Plastic Free Kinsale. This piece is to published to coincide with International Women’s Day (March 8th). Applications for the fifth Homeward Bound programme open on the March 7th. Apply at www.homewardboundprojects.com