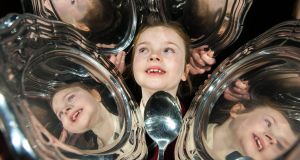 Most parents of primary school students want to see an increased focus on science education, as they believe it will give their children an advantage in their future careers and be beneficial for society, according a survey.

The research, published on Wednesday, was commissioned by the RDS to coincide with the inaugural ESB Science Blast Dublin event, and conducted by iReach among 500 parents.

Science Blast is an all-Ireland showcase of science by primary school pupils with more than 10,000 pupils from 486 schools participating this year.

Some 96 per cent of parents in the survey identified the growing need for their children to learn life skills, such as critical thinking, creativity, collaboration and communication. More than half (57 per cent ) saw science as the third most important subject after Maths and English in delivering these life skills.

The research showed parents understand the critical role of science today; 83 per cent of parents believe a good understanding of science is needed to live and work today. The majority (82 per cent) also believe basic science education will give their children an advantage in life.

A large proportion of parents (64 per cent) talk with their children about science subjects and activities in their school.

For nine years, the RDS organised the Primary Science Fair, which inspired entire classrooms around the country with the wonders of science, technology, engineering and maths (STEM) – it took place alongside the BT Young Scientist & Technology Exhibition (BTYSTE) each January.

Because of its success and the growing interest of schools and teachers, it has been expanded to ESB Science Blast, beginning with the showcase of the work of young researchers in Dublin this week at the RDS Simmonscourt on Wednesday and Thursday.

A similar non-competitive gathering will be staged at Mary Immaculate College in Limerick (May 21st to 23rd) and at ICC Belfast (June 5th to 6th).

Pupils from 3rd to 6th class are encouraged to get involved in an education programme investigating the science behind a simple question. RDS chief executive Michael Duffy underlined its ability to nourish “21st century skills such as critical thinking, problem-solving and creativity at a young age”.

“From our previous work in science education, we know that participation at this young age can have significant benefits from an individual level right through to the entire school community. ESB Science Blast is designed to open the minds of the next generation to the amazing possibilities of STEM, through harnessing the natural curiosity found in every child.”

The demand from classes was such, “we had to expand”, he added; so much so 256 schools in Dublin, 140 schools in Limerick and 80 in Belfast would be demonstrating the fruits of their scientific endeavour in the events run by the RDS.

While their brief was to find a question in the every world – such as, “do plants have feelings?” – and to investigate, the exercise was of immense value in providing lessons in the scientific method and the core principles behind STEM.

The initiative also helped underline that science and technology was “everywhere around us”, and not confined to people in white coats, Mr Duffy pointed out.

Feedback from both participants and teachers was really strong, he said, while it was attracting a broad range of schools; from the small rural school to the big primary school in Dublin – and on all-island basis.

The RDS has been cultivating interest in science and helping to develop science skills for generations, and was constantly seeking to remain relevant on this front. He hoped Science Blast would prompt greater participation in the BTYSTE and other science fairs at second level – and ultimately that a percentage would be drawn to a career in science.

It was made possible, Mr Duffy added, through a partnership with the ESB as sponsor, combined with partial funding from Science Foundation Ireland, as well as the voluntary efforts of 200 judges from academia or STEM-related industry.

ESB chief executive Pat O’Doherty said the ESB was committed to supporting STEM education and learning as a way of empowering young people to fulfil their potential and encouraging them to positively engage with the issues and challenges facing society.

ESB Science Blast taps into the innate curiosity and creativity of children and would “enable them to critically assess the world around them and become the problem solvers and influencers of the future”.

More information on entering ESB Science Blast in Limerick and Belfast is at: esbscienceblast.com

1 Swimming ban at Dublin's Merrion strand due to poor water quality
2 Coronavirus: What will reopen in Ireland’s phases to ease restrictions?
3 Coronavirus: No new Covid-19 deaths reported in State for first time since March
4 Unconvincing account may take some heat out of Dominic Cummings controversy
5 Tributes paid to Ireland’s deputy ambassador to China who died on Sunday
Real news has value SUBSCRIBE

Why choose a business course? Creativity, teamwork alongside enterprise 00:00
Third level gears up for blended learning 07:04
Swimming ban at Dublin's Merrion strand due to poor water quality 06:50
CAO decision time: What should you study at college? 06:39
CAO Q&A: Everything you need to know about the change of mind process 06:22