That’s Maths: Consensus on the origins and behaviour of rogue waves is only beginning to emerge 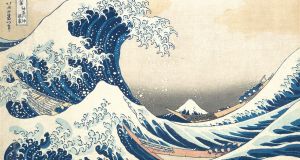 Hokusai’s woodcut The Great Wave off Kanagawa. The wave is estimated at more than 10m in height. In January 2014, a wave off Killard Point in Co Clare was measured at almost 30m. 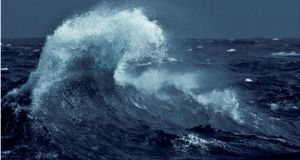 Rogue wave, photographed from the French ship Astrolabe in the Southern Ocean between Hobart and the Antarctic

The Great Wave off Kanagawa, one of the most iconic works of Japanese art, shows a huge breaking wave with foam thrusting forward at its crest, towering over three fishing boats, with Mount Fuji in the background. This woodcut, produced by artist Hokusai around 1830, is full of dynamism and dramatic tension. The wave, with height estimated at more than 10 meters, has inspired many artists and it appeared on the original score of Claude Debussy’s orchestral work La Mer.

In recent decades, many enormous sea waves have been observed, removing all doubt about the existence of rogue waves. These waves have heights more than double the surrounding waves. In January 2014, the height of a wave off Killard Point in Co Clare was measured at almost 30 meters. Although they are quite rare, rogue waves are part of the normal behaviour of the oceans.

Rogue waves have caused controversy, and consensus on their origins and behaviour is only beginning to emerge. It seems likely that several physical mechanisms are involved in the unusual amplification of these waves. Rogue waves are of limited extent, being localised in both the transverse and longitudinal directions. They are unrelated to tsunamis, which are extended in space and owe their existence to quite different causes.

Earlier mathematical studies of waves used linear theory, in which two waves can reinforce each other, but which cannot simulate rogue waves realistically. In nonlinear models, wave interactions can trigger instabilities that produce extreme peaks in wave height. The resulting rogue waves appear suddenly and disappear again just as suddenly.

A photograph of a rogue wave, taken from the French ship Astrolabe in the Southern Ocean between Hobart and the Antarctic, shows it to be localised and on the point of breaking. Its structural similarity to Hokusai’s wave is striking.

Recent research by Prof Frédéric Dias of UCD and co-workers examines the process of directional focusing in crossing seas, where wave trains with different directions can constructively interfere to produce extreme amplitudes at isolated locations. They support their theory with computer simulations having solutions very like the observed rogue waves.

Recently, rogue waves have been generated under laboratory conditions. We thus have corroborative evidence from mathematical theory, computer simulations, wave-tank experiments and observations, putting the essential characteristics and behaviour of rogue waves beyond doubt.

Despite progress, many questions about rogue waves remain unanswered

Ongoing research aims to determine the critical factors for the formation of rogue waves. Mariners’ lives depend on their ability to avoid them, and new theoretical descriptions may enable us to anticipate their likely occurrence. Despite progress, many questions about rogue waves remain unanswered and research continues. The pay-offs include greater accuracy of wave predictions and saving of money and of lives.

Peter Lynch is emeritus professor at UCD school of mathematics and statistics – he blogs at thatsmaths.com