Mathematical analysis of how neutrinos interact with matter prompts discovery 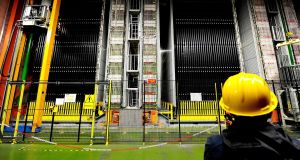 Although abstract in character, mathematics has concrete origins: the greatest advances have been inspired by the natural world. Recently, a new result in linear algebra was discovered by three physicists trying to understand the behaviour of neutrinos.

Neutrinos are subatomic particles that interact only weakly with matter, so that they pass easily through a wall, the Earth or a star. The American poet John Updike described them beautifully in his poem Cosmic Gall: Neutrinos, they are very small. / They have no charge and have no mass/ And do not interact at all./ The earth is just a silly ball/ To them, through which they simply pass, / Like dustmaids down a drafty hall/ Or photons through a sheet of glass.

Neutrinos are produced in vast numbers within the sun, and trillions pass harmlessly through our bodies every second. Almost nothing can stop them. Dune (the Deep Underground Neutrino Experiment) aims to unlock the mysteries of neutrinos. This international experiment will use particle accelerators to send an intense beam of high-energy neutrinos from Fermilab in Illinois 800 miles through the earth to massive detectors a mile below ground in South Dakota. The experiment may lead to life-saving applications in medicine and could change our understanding of the universe.

Neutrinos come in three “flavours”, and can switch suddenly from one form to another as they travel at close to the speed of light. Recently, three physicists, Peter Denton, Stephen Parke and Xining Zhang, studying these sudden changes, stumbled upon a new algebraic identity. The mathematical description of how neutrinos interact with matter involves square arrays of numbers called matrices. Every matrix has a set of characteristic numbers called eigenvalues; and along with each eigenvalue goes a direction in space called an eigenvector.

Eigenvalues and eigenvectors turn up in a wide range of contexts. Operations that stretch, shrink, shear, reflect or rotate objects in a linear way are described by matrices. The eigenvectors give the directions that remain unchanged under transformation, and the eigenvalues determine the change of length or angle of rotation.

The physicists noticed that the eigenvectors of their matrices could be expressed as combinations of the eigenvalues. Since the latter are much easier to calculate than the former, the new identity provides a powerful tool. It applies to symmetric matrices, known as Hermitian, after French mathematician Charles Hermite. The formula gives the eigenvectors in terms of the eigenvalues of the matrix and of sub-matrices called minors.

The background mathematics has been studied for centuries, and the physicists felt sure that the result must already be known. But they could not find it anywhere in the literature so they contacted a world-leading mathematician, Terence Tao at the University of California, Los Angeles. Tao responded within hours that he had never seen the result, and included in his email three independent proofs of the formula.

The result has already benefited the study of neutrinos. Tao is confident that it will be important elsewhere too. He is quoted in the online magazine Quanta as saying: “It’s so pretty that I’m sure it will have some use in the near future.”

Peter Lynch is emeritus professor at the school of mathematics and statistics at University College Dublin. He blogs at thatsmaths.com