Why is Mercury moving across the sun important?

Irish observers once led the world in making key measurements 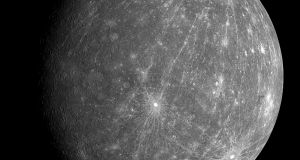 Mercury will delight astronomers across the world, and some robotic observatories in space, with its dash across the disk of the sun. Photograph: NASA handout/AFP/Getty Images

The planet Mercury will move across the sun on Monday. A relatively rare event, (the next one will not happen until 2032), which will be visible from Ireland, although prospective observers will need a telescope to see it.

Observing transits such as this has played an important role historically in the development of astronomy, especially in addressing a simple, but important question – exactly how far away is Earth from the sun? Without this number, we cannot know the distance of the planets from the sun, nor indeed even the true luminosity of the sun itself.

The famous astronomer Edmond Halley (of Halley’s Comet fame) realised that observations of planetary transits – especially the passage of Venus across the disk of the Sun – could be used to answer this.

The measurement is an example of parallax: the apparent position of a nearby object, relative to a distant background, depends on your vantage point. The nearer the object, the greater the parallax: Halley reasoned that by measuring the position of Venus against the more distant sun, the distance to the Sun could be calculated. In theory at least.

About 250 years ago, a major international effort was organised to observe the transit of Venus which occurred on June 3rd of that year. To maximise the accuracy of the measurements, many observations were attempted, especially over as wide a range of northerly and southerly latitudes as possible.

Most famously of all, Capt (then lieut) Cook set sail in the Endeavour, on a three-year voyage whose main purpose was to observe the transit of Venus from Tahiti. The fact that he also took the opportunity to circumnavigate New Zealand and land in Botany Bay, for the first time by Europeans , was almost an added bonus. The trials and tribulations of Cook, his crew and the indigenous people of Tahiti are of course well recorded, but from an astronomical point of view, the measurement he obtained was a success.

Closer to home, one of the more northerly observations carried out during this campaign were made from the townland of Cavan in Donegal, by Charles Mason, a particularly talented astronomical observer of the day. Mason had recently returned from boundary surveying work in the American Colonies, having, for example, mapped the famous Mason-Dixon Line (separating Pennsylvania and Maryland) with his colleague Jeremiah Dixon.

Mason was encouraged to make the transit observations from North West Ireland by the famous Astronomer Royal of the time, Nevil Maskelyne. Arriving in Donegal in March 1769, and spent the next few months readying himself for observations of the transit.

He didn’t leave until December, as it was necessary to carry out additional observations that would greatly improve the usefulness of his transit measurements – determining the longitude and latitude of his location in Donegal. Indeed, astronomical observations played a key role in map making in the 18th century; astronomers could use observations of the Sun, moon and stars to accurately measure the local latitude, and especially the more challenging longitude.

Mason’s measurements in Donegal, for example, had the effect of moving that part of Ireland some 30km to the East: it was one of four fiducial points in Ireland – Dublin, Cork and Cookstown in Tyrone the others – that Daniel Augustus Beaufort used to create his seminal map of Ireland in 1792.

The Cork measurements were carried out by Dr John Longfield, a medical doctor, practicing on St Patrick’s Street in the city, who also built his own observatory. By coincidence, one of the instruments he used – a quadrant to measure the altitude of stars – had been used by Cook and his crew during their voyage to Tahiti years before.

That quadrant still exists to this day, in the British Science Museum in London: it is a testament to an age when astronomy played a key role in mapping the Earth, not to mention humanity’s early strides to get the measure of the universe.

Prof Paul Callanan is a physicist based at University College Cork